Click on either link below to read the story from the source or scroll down. 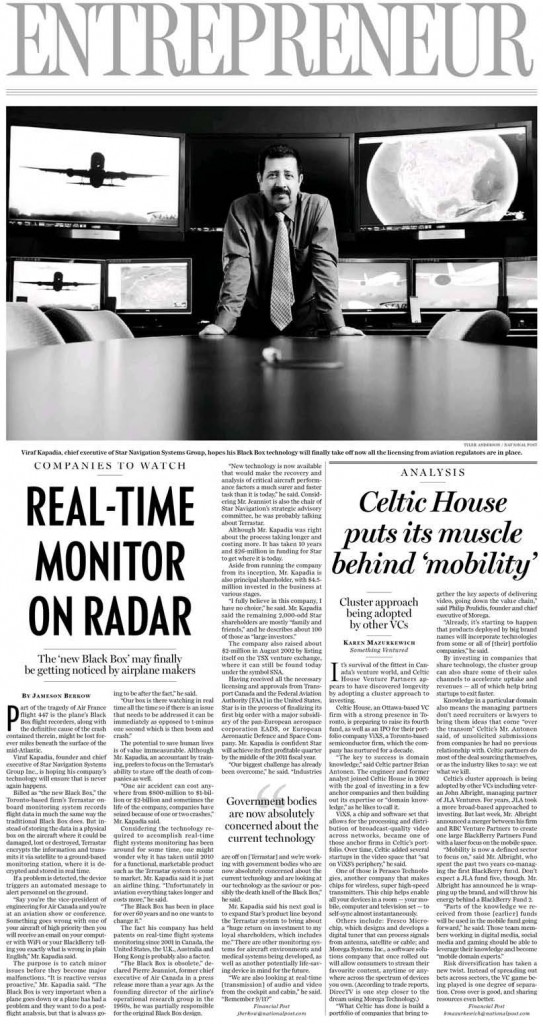 Viraf Kapadia, chief executive of Star Navigation Systems Group, hopes his Black Box technology will finally take off now all the licensing from aviation regulators are in place.

Part of the tragedy of Air France flight 447 is the plane’s Black Box flight recorders, along with the definitive cause of the crash contained therein, might be lost forever miles beneath the surface of the mid-Atlantic.

Billed as “the new Black Box,” the Toronto-based firm’s Terrastar onboard monitoring system records flight data in much the same way the traditional Black Box does. But instead of storing the data in a physical box on the aircraft where it could be damaged, lost or destroyed, Terrastar encrypts the information and transmits it via satellite to a ground-based monitoring station, where it is decrypted and stored in real time.

If a problem is detected, the device triggers an automated message to alert personnel on the ground.

“Say you’re the vice-president of engineering for Air Canada and you’re at an aviation show or conference. Something goes wrong with one of your aircraft of high priority then you will receive an email on your computer with WiFi or your BlackBerry telling you exactly what is wrong in plain English,” Mr. Kapadia said.

The purpose is to catch minor issues before they become major malfunctions. “It is reactive versus proactive,” Mr. Kapadia said. “The Black Box is very important when a plane goes down or a plane has had a problem and they want to do a postflight analysis, but that is always going to be after the fact,” he said.

“Our box is there watching in real time all the time so if there is an issue that needs to be addressed it can be immediately as opposed to t-minus one second which is then boom and crash.”

The potential to save human lives is of value immeasurable. Although Mr. Kapadia, an accountant by training, prefers to focus on the Terrastar’s ability to stave off the death of companies as well.

“One air accident can cost anywhere from $800-million to $1-billion or $2-billion and sometimes the life of the company, companies have seized because of one or two crashes,” Mr. Kapadia said.

Considering the technology required to accomplish real-time flight systems monitoring has been around for some time, one might wonder why it has taken until 2010 for a functional, marketable product such as the Terrastar system to come to market. Mr. Kapadia said it is just an airline thing. “Unfortunately in aviation everything takes longer and costs more,” he said.

“The Black Box has been in place for over 60 years and no one wants to change it.”

The fact his company has held patents on real-time flight systems monitoring since 2001 in Canada, the United States, the U.K., Australia and Hong Kong is probably also a factor.

“The Black Box is obsolete,” declared Pierre Jeanniot, former chief executive of Air Canada in a press release more than a year ago. As the founding director of the airline’s operational research group in the 1960s, he was partially responsible for the original Black Box design.

“New technology is now available that would make the recovery and analysis of critical aircraft performance factors a much surer and faster task than it is today,” he said. Considering Mr. Jeanniot is also the chair of Star Navigation’s strategic advisory committee, he was probably talking about Terrastar.

Although Mr. Kapadia was right about the process taking longer and costing more. It has taken 10 years and $26-million in funding for Star to get where it is today.

Aside from running the company from its inception, Mr. Kapadia is also principal shareholder, with $4.5-million invested in the business at various stages.

“I fully believe in this company, I have no choice,” he said. Mr. Kapadia said the remaining 2,000-odd Star shareholders are mostly “family and friends,” and he describes about 100 of those as “large investors.”

The company also raised about $2-million in August 2002 by listing itself on the TSX venture exchange, where it can still be found today under the symbol SNA.

Having received all the necessary licensing and approvals from Transport Canada and the Federal Aviation Authority [FAA] in the United States, Star is in the process of finalizing its first big order with a major subsidiary of the pan-European aerospace corporation EADS, or European Aeronautic Defence and Space Company. Mr. Kapadia is confident Star will achieve its first profitable quarter by the middle of the 2011 fiscal year.

“Our biggest challenge has already been overcome,” he said. “Industries

are off on [Terrastar] and we’re working with government bodies who are now absolutely concerned about the current technology and are looking at our technology as the saviour or possibly the death knell of the Black Box,” he said.

Mr. Kapadia said his next goal is to expand Star’s product line beyond the Terrastar system to bring about a “huge return on investment to my loyal shareholders, which includes me.” There are other monitoring systems for aircraft environments and medical systems being developed, as well as another potentially life-saving device in mind for the future.

“We are also looking at real-time [transmission] of audio and video from the cockpit and cabin,” he said. “Remember 9/11?”