NATIONAL POST NEWSPAPER STORY Our client Jack Lee,  Founder and Chairman of 4Refuel  discussed Fuel Management Strategies and how there is Huge growth in store for fuel management firms. 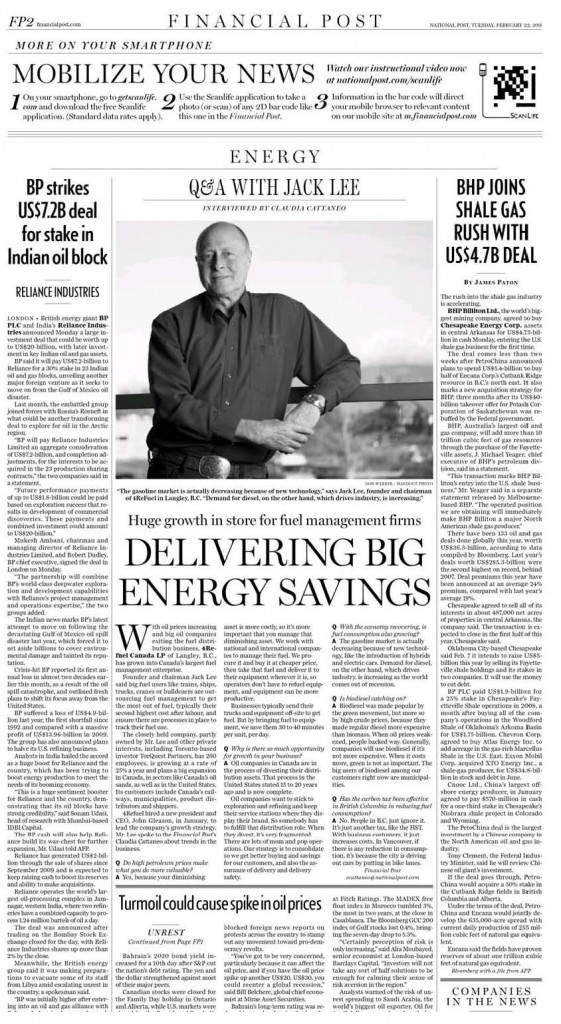 DON WEBBER / HANDOUT PHOTO INTERVIEWED BY CLAUDIA CATTANEO
“The gasoline market is actually decreasing because of new technology,” says Jack Lee, founder and chairman of 4ReFuel in Langley, B.C. “Demand for diesel, on the other hand, which drives industry, is increasing.”

Founder and chairman Jack Lee said big fuel users like trains, ships, trucks, cranes or bulldozers are outsourcing fuel management to get the most out of fuel, typically their second highest cost after labour, and ensure there are processes in place to track their fuel use.

The closely held company, partly owned by Mr. Lee and other private interests, including Toronto-based investor TorQuest Partners, has 260 employees, is growing at a rate of 25% a year and plans a big expansion in Canada, in sectors like Canada’s oil sands, as well as in the United States. Its customers include Canada’s railways, municipalities, product distributors and shippers.

4Refuel hired a new president and CEO, John Gleason, in January, to lead the company’s growth strategy. Mr. Lee spoke to the Financial Post’s Claudia Cattaneo about trends in the business.

Q Do high petroleum prices make what you do more valuable?

A Yes, because your diminishing asset is more costly, so it’s more important that you manage that diminishing asset. We work with national and international companies to manage their fuel. We procure it and buy it at cheaper price, then take that fuel and deliver it to their equipment wherever it is, so operators don’t have to refuel equipment, and equipment can be more productive.

Businesses typically send their trucks and equipment off-site to get fuel. But by bringing fuel to equipment, we save them 30 to 40 minutes per unit, per day.

Q Why is there so much opportunity for growth in your business?

A Oil companies in Canada are in the process of divesting their distribution assets. That process in the United States stated 15 to 20 years ago and is now complete.

Oil companies want to stick to exploration and refining and keep their service stations where they display their brand. So somebody has to fulfill that distribution role. When they divest, it’s very fragmented. There are lots of mom and pop operations. Our strategy is to consolidate so we get better buying and savings for our customers, and also the assurance of delivery and delivery safety.

Q With the economy recovering, is fuel consumption also growing?

A The gasoline market is actually decreasing because of new technology, like the introduction of hybrids and electric cars. Demand for diesel, on the other hand, which drives industry, is increasing as the world comes out of recession. Q Is biodiesel catching on? A Biodiesel was made popular by the green movement, but more so by high crude prices, because they made regular diesel more expensive than biomass. When oil prices weakened, people backed way. Generally, companies will use biodiesel if it’s not more expensive. When it costs more, green is not as important. The big users of biodiesel among our customers right now are municipalities.

Q Has the carbon tax been effective in British Columbia in reducing fuel consumption?

A No. People in B.C. just ignore it. It’s just another tax, like the HST. With business customers, it just increases costs. In Vancouver, if there is any reduction in consumption, it’s because the city is driving out cars by putting in bike lanes.