Newspaper story: Our client, Kennedy Wilson Auction Group was featured in a news story  about an upcoming  Auction in Hawaii.

Click Here to Read from PDF or scroll below 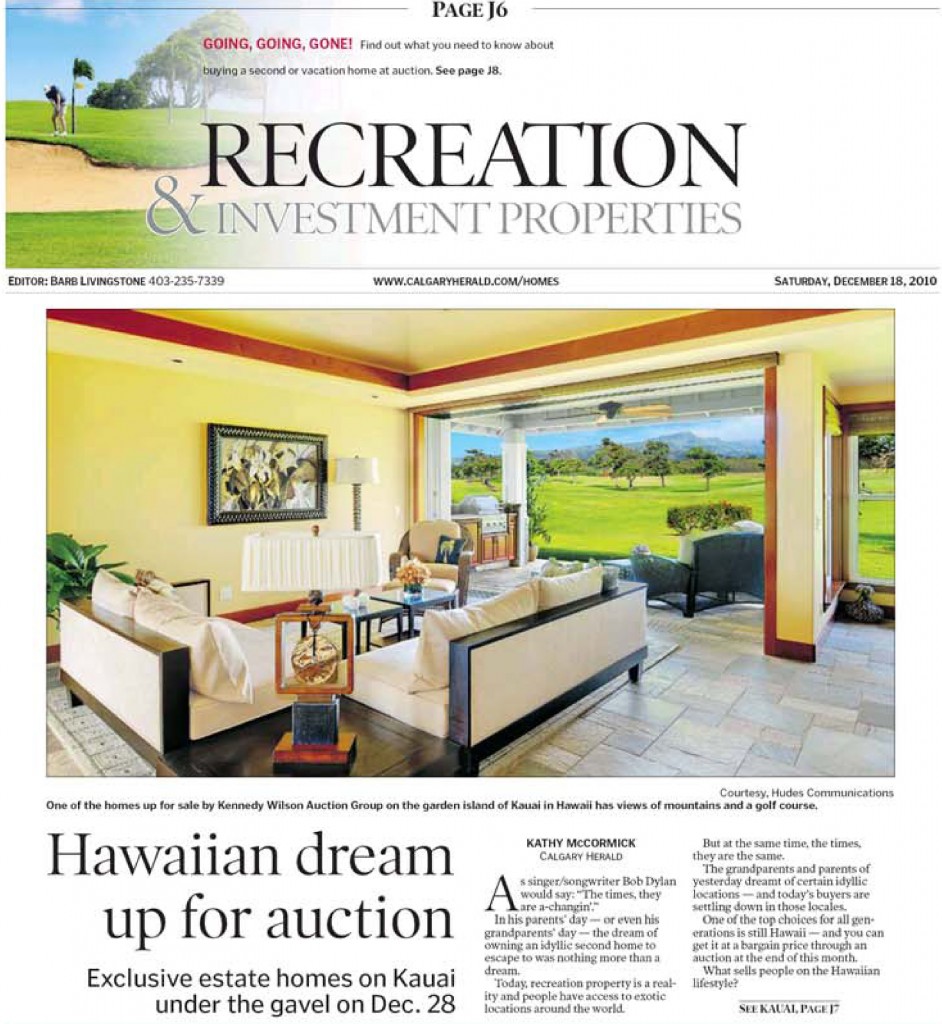 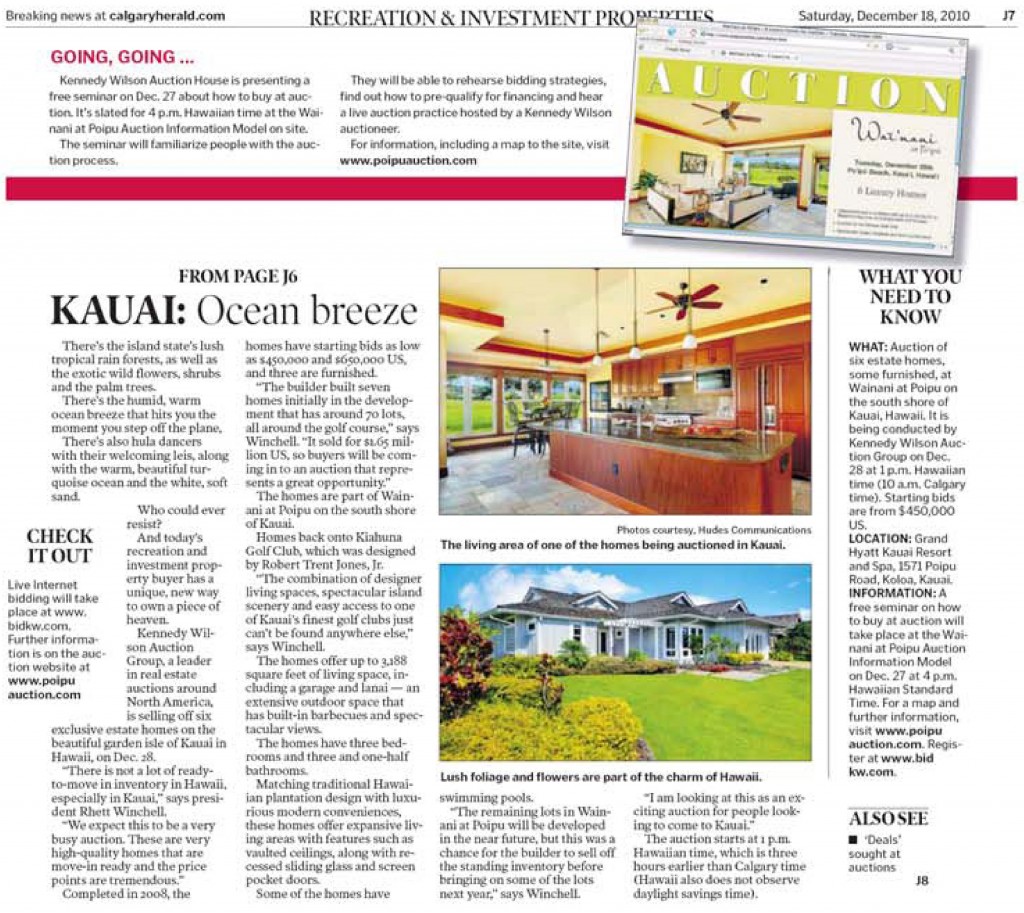 Hawaiian dream up for auction

Exclusive estate homes on Kauai under the gavel on Dec. 28

As singer/songwriter Bob Dylan would say: “The times, they are a-changin’.”

In his parents’ day — or even his grandparents’ day — the dream of owning an idyllic second home to escape to was nothing more than a dream.

Today, recreation property is a reality and people have access to exotic locations around the world.

But at the same time, the times, they are the same.

The grandparents and parents of yesterday dreamt of certain idyllic locations — and today’s buyers are settling down in those locales.

One of the top choices for all generations is still Hawaii — and you can get it at a bargain price through an auction at the end of this month.

What sells people on the Hawaiian lifestyle?

There’s the island state’s lush tropical rain forests, as well as the exotic wild flowers, shrubs and the palm trees.

There’s the humid, warm ocean breeze that hits you the moment you step off the plane,

There’s also hula dancers with their welcoming leis, along with the warm, beautiful turquoise ocean and the white, soft sand.

Who could ever resist?

And today’s recreation and investment property buyer has a unique, new way to own a piece of heaven.

Kennedy Wilson Auction Group, a leader in real estate auctions around North America, is selling off six exclusive estate homes on the beautiful garden isle of Kauai in Hawaii, on Dec. 28.

“There is not a lot of ready-to-move in inventory in Hawaii, especially in Kauai,” says president Rhett Winchell.

“We expect this to be a very busy auction. These are very high-quality homes that are move-in ready and the price points are tremendous.”

“The builder built seven homes initially in the development that has around 70 lots, all around the golf course,” says Winchell. “It sold for $1.65 million US, so buyers will be coming in to an auction that represents a great opportunity.”

The homes are part of Wainani at Poipu on the south shore of Kauai.

Homes back onto Kiahuna Golf Club, which was designed by Robert Trent Jones, Jr.

The homes offer up to 3,188 square feet of living space, including a garage and lanai — an extensive outdoor space that has built-in barbecues and spectacular views.

The homes have three bedrooms and three and one-half bathrooms.

Some of the homes have swimming pools.

“The remaining lots in Wainani at Poipu will be developed in the near future, but this was a chance for the builder to sell off the standing inventory before bringing on some of the lots next year,” says Winchell.

“I am looking at this as an exciting auction for people looking to come to Kauai.”

The auction starts at 1 p.m. Hawaiian time, which is three hours earlier than Calgary time (Hawaii also does not observe daylight savings time).

WHAT YOU NEED TO KNOW

WHAT: Auction of six estate homes, some furnished, at Wainani at Poipu on the south shore of Kauai, Hawaii. It is being conducted by Kennedy Wilson Auction Group on Dec. 28 at 1 p.m. Hawaiian time (10 a.m. Calgary time). Starting bids are from $450,000 US.

INFORMATION: A free seminar on how to buy at auction will take place at the Wainani at Poipu Auction Information Model on Dec. 27 at 4 p.m. Hawaiian Standard Time. For a map and further information, visit www.poipu auction.com.

Kennedy Wilson Auction House is presenting a free seminar on Dec. 27 about how to buy at auction. It’s slated for 4 p.m. Hawaiian time at the Wainani at Poipu Auction Information Model on site.

The seminar will familiarize people with the auction process.

They will be able to rehearse bidding strategies, find out how to pre-qualify for financing and hear a live auction practice hosted by a Kennedy Wilson auctioneer.

For information, including a map to the site, visit www.poipuauction.com

The following are fivetop tips about buying at an auction:

-Auctions aren’t for just fixer-upper homes. Sometimes, they are the most attractive properties in the most desirable neighbourhoods.

-Check if the auction house has made prior arrangements with a mortgage company that has already approved the project.

-Research current sales in the area so you have an idea what you want to pay — and set a firm upper limit based on your pre-qualification so you don’t overbid.

-See if any new home warranties offered by the developer apply to the auctioned units. If not, you should purchase your own warranty policy.

-See if the auction house is having a pre-auction seminar so you know in advance how the bidding will work.

Follow these tips to get a good deal by buying at auction because you know someone was willing to pay just one-bid less.

“The real estate auction in general is doing very well,” says Rhett Winchell from the company’s home base in California.

“The majority of builders are selling most, if not all, of their inventory and buyers are there to buy — and they’re taking advantage of the market to get a deal.”

While already-constructed homes are more attractive to auction buyers than empty lots, the auctions have been successful this year, he says, adding more are planned for 2011. “The market has stabilized and I think we’ll see even more sales next year,” says Winchell.

“Buyers are more confident. Prices were dropping last year and sellers realize the value has gone down, so the auctions are starting at a new price point and buyers are getting a deal.”

The company has moved into Canada with auctions as well, including the Calgary area and interior B.C.

“We’ve had a lot of Canadian buyers with all of our auction properties — and a lot of interest from Canadians in our auctions,” says Winchell.

Wainani at Poipu — which means “crashing waves” in the Hawaiian language — is on the south shore of the island of Kauai in Hawaii.

Known as the Garden Isle, Kauai is the wettest of the Hawaiian islands.

But more rain is on the north shore and at the centre of the island, where Mount Waialeale has experienced more than 1,000 centimetres of rain per year.

The south shore and beach areas have as little as 18 centimetres of rain per year. Average winter temperatures overall are about 24 C and average winter rainfall is in the seven to 15 centimetres range per month.

The result of the rainfall is lush, tropical rainforests and mountain canyons with spectacular waterfalls.

These include Waimea Canyon State Park, better known as the Grand Canyon of the Pacific, so named by American author Mark Twain.

The fourth largest of the main Hawaiian islands, Kauai is 1,456 square kilometres and had a population of 58,303 in 2000. It is located 170 kilometres northwest of Oahu.