Menu
No Comments
Newspaper story: Our client, Kennedy Wilson Auction Group was featured in a news story  about an upcoming  Auction in Hawaii.
Click Here To Read From PDF or scroll down 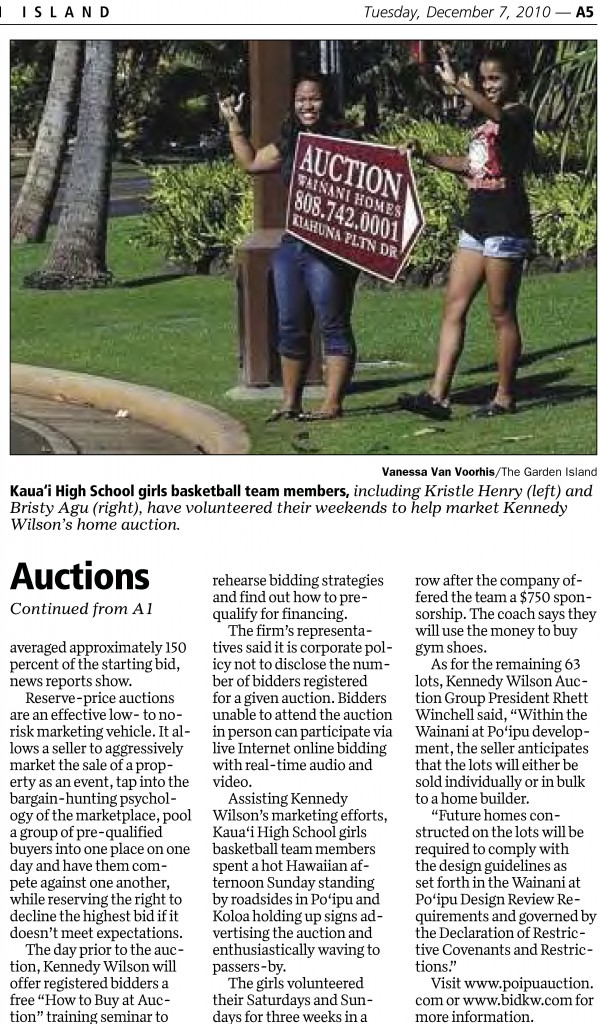 PO‘IPU — In this current economic climate, everyone from first-time buyers to investment companies are on the lookout for distressed properties.

Kaua‘i real estate agents say it’s a buyer’s marketplace and those buyers are all bargain hunters.

But the property auctions some major investment firms are holding to capitalize on this environment may not be as straightforward as they seem.

“The acquisition was completed through Kennedy Wilson’s Property Fund III, a value-added, opportunistic investment vehicle that targets real estate in the western US and Hawai‘i,” a press release stated.

The rest of the subdivision was never developed and the model homes never sold.

However, this is not an “absolute auction.” An absolute auction means the highest bidder acquires the item being auctioned irrespective of bid amount, and there is no reserve price below which it will not be sold.

Kennedy Wilson’s auctions typically use an unpublished reserve price, which allows them to refuse the highest bidder. The starting bid price is not the reserve price.

For instance, at the firm’s recent auction of condominiums within the John Ross building in Portland, Ore., the winning bidder’s price averaged approximately 150 percent of the starting bid, news reports show.

Reserve-price auctions are an effective low- to no-risk marketing vehicle. It allows a seller to aggressively market the sale of a property as an event, tap into the bargain-hunting psychology of the marketplace, pool a group of pre-qualified buyers into one place on one day and have them compete against one another, while reserving the right to decline the highest bid if it doesn’t meet expectations.

The day prior to the auction, Kennedy Wilson will offer registered bidders a free “How to Buy at Auction” training seminar to rehearse bidding strategies and find out how to pre-qualify for financing.

The firm’s representatives said it is corporate policy not to disclose the number of bidders registered for a given auction. Bidders unable to attend the auction in person can participate via live Internet online bidding with real-time audio and video.

The girls volunteered their Saturdays and Sundays for three weeks in a row after the company offered the team a $750 sponsorship. The coach says they will use the money to buy gym shoes.

As for the remaining 63 lots, Kennedy Wilson Auction Group President Rhett Winchell said, “Within the Wainani at Po‘ipu development, the seller anticipates that the lots will either be sold individually or in bulk to a home builder.

“Future homes constructed on the lots will be required to comply with the design guidelines as set forth in the Wainani at Po‘ipu Design Review Requirements and governed by the Declaration of Restrictive Covenants and Restrictions.”