Newspaper Story: Our client, Kennedy Wilson Auction Group was featured  in a news story  about an upcoming Auction in Houston, Texas.

Click Here to read story from PDF or scroll down below 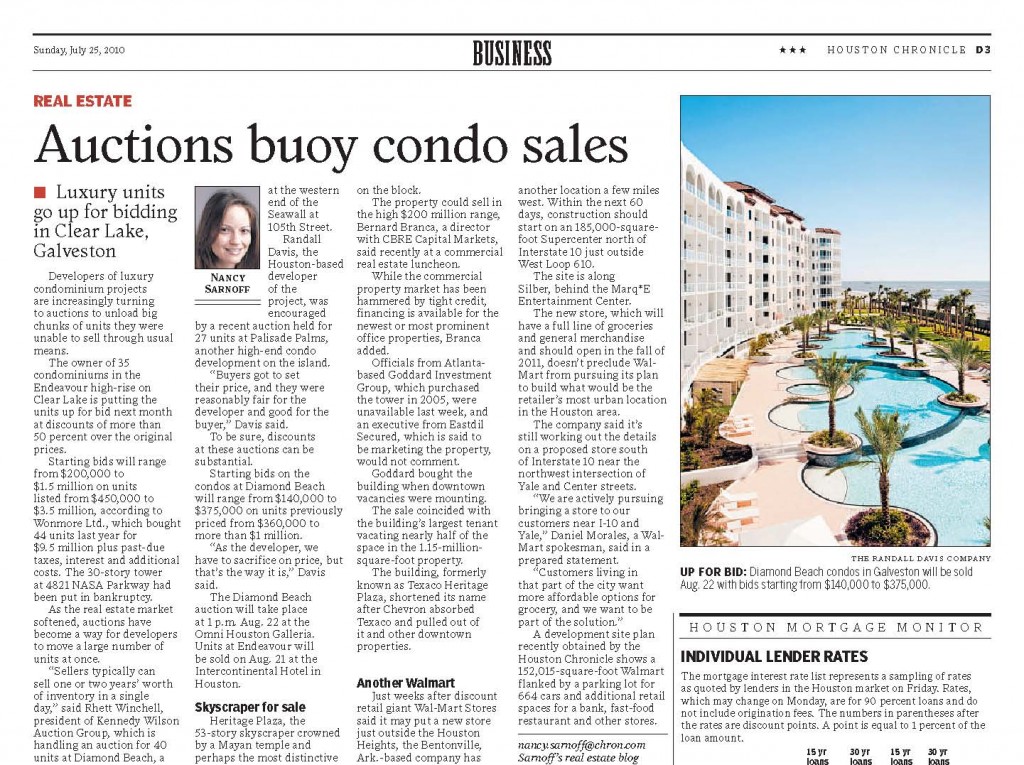 Luxury units go up for bidding in Clear Lake, Galveston

Developers of luxury condominium projects are increasingly turning to auctions to unload big chunks of units they were unable to sell through usual means.

The owner of 35 condominiums in the Endeavour high-rise on Clear Lake is putting the units up for bid next month at discounts of more than 50 percent over the original prices.

As the real estate market softened, auctions have become a way for developers to move a large number of units at once.

“Sellers typically can sell one or two years’ worth of inventory in a single day,” said Rhett Winchell, president of Kennedy Wilson Auction Group, which is handling an auction for 40 units at Diamond Beach, a luxury resort in Galveston at the western end of the Seawall at 105th Street.

Randall Davis, the Houston-based developer of the project, was encouraged by a recent auction held for 27 units at Palisade Palms, another high-end condo development on the island.

“Buyers got to set their price, and they were reasonably fair for the developer and good for the buyer,” Davis said.

To be sure, discounts at these auctions can be substantial.

“As the developer, we have to sacrifice on price, but that’s the way it is,” Davis said.

The Diamond Beach auction will take place at 1 p.m. Aug. 22 at the Omni Houston Galleria. Units at Endeavour will be sold on Aug. 21 at the Intercontinental Hotel in Houston.

Heritage Plaza, the 53-story skyscraper crowned by a Mayan temple andperhaps the most distinctive in the downtown skyline, is on the block.

The property could sell in the high $200 million range, Bernard Branca, a director with CBRE Capital Markets, said recently at a commercial real estate luncheon.

While the commercial property market has been hammered by tight credit, financing is available for the newest or most prominent office properties, Branca added.

Officials from Atlanta-based Goddard Investment Group, which purchased the tower in 2005, were unavailable last week, and an executive from Eastdil Secured, which is said to be marketing the property, would not comment.

Goddard bought the building when downtown vacancies were mounting.

The sale coincided with the building’s largest tenant vacating nearly half of the space in the 1.15-million-square-foot property.

The building, formerly known as Texaco Heritage Plaza, shortened its name after Chevron absorbed Texaco and pulled out of it and other downtown properties.

Just weeks after discount retail giant Wal-Mart Stores said it may put a new store just outside the Houston Heights, the Bentonville, Ark.-based company has opened up about plans for another location a few miles west. Within the next 60 days, construction should start on an 185,000-square-foot Supercenter north of Interstate 10 just outside West Loop 610.

The site is along Silber, behind the Marq*E Entertainment Center.

The new store, which will have a full line of groceries and general merchandise and should open in the fall of 2011, doesn’t preclude Wal-Mart from pursuing its plan to build what would be the retailer’s most urban location in the Houston area.

The company said it’s still working out the details on a proposed store south of Interstate 10 near the northwest intersection of Yale and Center streets.

“We are actively pursuing bringing a store to our customers near I-10 and Yale,” Daniel Morales, a Wal-Mart spokesman, said in a prepared statement.

“Customers living in that part of the city want more affordable options for grocery, and we want to be part of the solution.”

A development site plan recently obtained by the Houston Chronicle shows a 152,015-square-foot Walmart flanked by a parking lot for 664 cars and additional retail spaces for a bank, fast-food restaurant and other stores.