Menu
No Comments
Newspaper Story: Our client, Kennedy Wilson Auction Group was featured  in a news story  about an upcoming Auction in Houston, Texas.

I’m sensing a trend here. Another island developer is turning to auctions in the face of a really stubborn real estate slump. Everyone agrees buyers are looking on the island, but they’re prowling for bargains.

The latest to turn to the gavel is Randall Davis, developer of Diamond Beach, a 117-unit mid-rise resort and spa under way on 8.5 acres at the seawall’s western edge. The pale pink project came online last summer. Davis hopes to sell 40-beachfront condominiums at the Aug. 22 auction. Starting bids are $140,000. Click here for auction information.

Then, West End development Beachside Village, earlier this month held an auction for 29 home sites and commercial properties. No official word on whether that auction was a success. 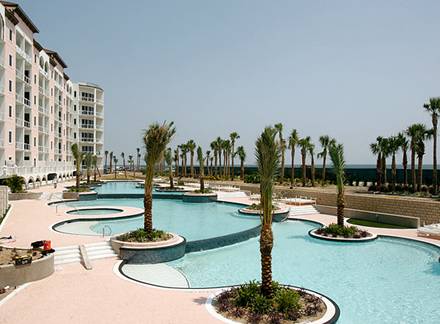 A cascading pool runs nearly the width of Diamond Beach, a mid-rise condominium resort and spa in Galveston. Photo by Jennifer Reynolds.

All these posh developments came online just before or right after Hurricane Ike and the market dive.

Palisade Palms saw auctions as the best possible solution to a difficult market. Many residents were struggling to restructure financing to meet obligations, according to a May 6 letter from the project’s developer to condominium owners. Some sought to rent their units, while others decided to sell.

“Contrary to the conventional wisdom circulating at Palisade Palms, we believe this issue, in varying degrees, is affecting most residents; primary residents, secondary residents, as well as people who may be considered ‘an investor,’” Richard Anderson, a principal in Falcon Group, which developed Palisade Palms.

In the letter, Anderson echoed the sentiment of a lot of real estate industry observers. Buyers are out there, but they holding out for price drops.

“Our internal assessment has concluded that while where are currently many prospective purchasers in the Galveston marketplace, at this time they are unwilling to purchase a unit because of a lack of confidence in determining the actual market value,” Anderson said. “In other words, many sales have stalled while prospective purchasers wait to see if the prices will drop further before they will actually move forward with a purchase.”

Palisade Palms and other developers see the auctions as a way to reduce market supply on the island while buoying up property values at their projects.

What do you think? Are auctions the right way to go?