Menu
No Comments
Newspaper Story: Our client, Kennedy Wilson Auction Group was featured in a  story about an upcoming Auction in Portland, Oregon Real estate news articles from The Oregonian’s Ryan Frank. 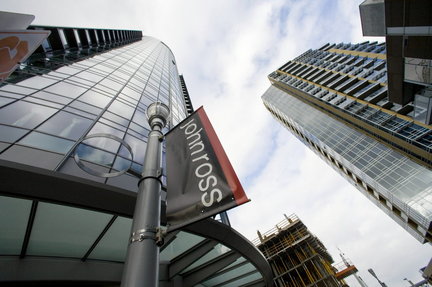 The OregonianThe John Ross (left) and the Meriwether (right).

More than any other major condo project, the John Ross has come to symbolize the condo bubble and bust. In 2005, would-be buyers reserved 80 percent of the building.

The John Ross’ builders – Williams & Dame Development and Gerding Edlen Development Co. – in 2007 sued people who put down deposits but tried to back of their purchase. And among the John Ross buyers who closed their deals, about two dozen have already defaulted on their mortgages, by my count. That’s by far the highest of the three condo buildings in South Waterfront. The Meriwether was the first condo project in South Waterfront and sold out before the market turned sour. The Atwater Place is on the river, has nicer finishes than the John Ross and commands higher prices. That means the Atwater Place has a different buyer profile. They tend to be more affluent and able to withstand the recession.

When: 1 p.m. Sunday, April 11. Bidders should arrived no later than noon. The auction should take about an hour and a half.

If South Waterfront has an entry level condo building, it’s the John Ross. I wouldn’t necessarily call the John Ross entry level given its still relatively high prices. But the prices are lower the other South Waterfront buildings and the finishes not as flashy. It’s a block off the river and doesn’t have as many unobstructed Mt. Hood views as the Atwater Place or Meriwether. The John Ross buyers I’ve met tend to be single 20-somethings with dogs. Or California investors. The John Ross is also massive. At 303 units, it’s the largest building in the city. As of March 10, 223 condos had sold and two sales were pending.

The John Ross auction follows a similar auction for the Atwater Place in September. I summarized those auction results here. That auction drove prices down again in the Portland condo market but they also sparked new buyer interest.

Patrick Clark, at Realty Trust City, has been the listing broker at the start of all three South Waterfront condo projects for the developers, Mark Edlen and Homer Williams. According to his figures, the John Ross had five closed sales in the first seven months of 2009 before the Atwater auction was announced. Those sales averaged $300 per square foot. In the seven months since the auction, the John Ross has closed 36 sales. But those sales came at a 10 percent discount at an average of $271 per square foot.

Real estate auctions are always a buyer beware situation. The auctioneers are pros. I attended REDC’s auction for Buena Vista Custom Homes’ inventory in December 2007 and Accelerated Marketing Partners September 2009 auction of the Atwater Place. The auctioneers know how to whip up bidders into a froth. That’s all fine. But it’s important for anyone who is thinking of buying to understand the rules and bidder obligations. That means you must carefully read the terms and conditions and consultant a real estate lawyer or broker. The terms and conditions are laid out in this brochure.

Kennedy Wilson Auction Group, which is running the John Ross event, did the same for Astoria’s Cannery Lofts last year and an upcoming auction for Seattle’s Fifth and Madison condo building.

I’m neither a lawyer or a broker. But I have listed some important points to know below. To keep up on the latest about the auction, keep coming back to this point. I’ll post updates here.

For details on all 50 units going up for auction — including highest list price and the discounts offered at auction — check out this spreadsheet.