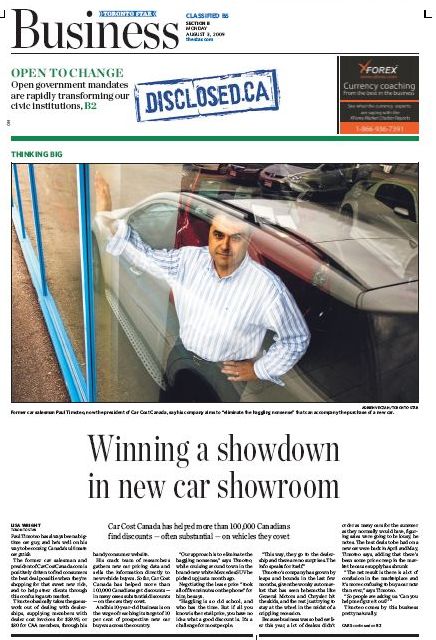 Former car salesman Paul Timoteo, now the president of Car Cost Canada, say his company aims to “eliminate the haggling nonsense” that can accompany the purchase of a new car.

Paul Timoteo has always been a big-time car guy, and he’s well on his way to becoming Canada’s ultimate car guide.

The former car salesman and president of CarCostCanada.com is positively driven to find consumers the best deal possible when they’re shopping for that sweet new ride, and to help steer clients through this confusing auto market.

Timoteo basically takes the guesswork out of dealing with dealerships, supplying members with dealer cost invoices for $39.95, or $30 for CAA members, through his handy consumer website.

His crack team of researchers gathers new car pricing data and sells the information directly to new vehicle buyers. So far, Car Cost Canada has helped more than 100,000 Canadians get discounts – in many cases substantial discounts – on the cars they covet.

And his 10-year-old business is on the verge of reaching its target of 10 per cent of prospective new car buyers across the country.

“Our approach is to eliminate the haggling nonsense,” says Timoteo, while cruising around town in the brand-new white Mercedes SUV he picked up just a month ago.

Negotiating the lease price “took all of five minutes on the phone” for him, he says.

“Haggling is so old school, and who has the time. But if all you know is the retail price, you have no idea what a good discount is. It’s a challenge for most people.

“This way, they go to the dealership and there are no surprises. The info speaks for itself.”

Timoteo’s company has grown by leaps and bounds in the last few months, given the wonky auto market that has seen behemoths like General Motors and Chrysler hit the skids, and the rest just trying to stay at the wheel in the midst of a crippling recession.

Because business was so bad earlier this year, a lot of dealers didn’t order as many cars for the summer as they normally would have, figuring sales were going to be lousy, he notes. The best deals to be had on a new car were back in April and May, Timoteo says, adding that there’s been some price creep in the market because supply has shrunk.

“The net result is there is a lot of confusion in the marketplace and it’s more confusing to buy a car now than ever,” says Timoteo.

“So people are asking us: `Can you help me figure it out?'”

“My dad had a used-car lot in Toronto. I was the kid who washed the cars and parked the cars, so I grew up with them,” he says.

He then went on to sales at several dealerships over the years, including Ford, Chevy, Honda, Lotus and Alpha Romeo.

His insight into the inner workings of those intimidating dealerships allows him to sniff out the deals – and share his tricks of the trade with consumers.

What buyers need to know, he says, is that two cars with the same retail sticker price are not actually the same price.

Why is that? Well, due to different dealer margins, varying profit levels and changing rebates and incentives, the difference could be thousands of dollars in savings.

Car Cost Canada is a helpful resource that arms consumers with exclusive, up-to-date information on everything from what the dealers actually pay the factory to how to find secret factory rebates, seek out the lower-priced dealers and get the best bottom-line price.

With car sales down roughly 20 per cent in the first quarter of 2009 and big automakers continuing their downward slide, Armada Data Corp. – the Mississauga-based, publicly traded parent company to Car Cost Canada – has seen a 45 per cent jump in sales and a doubling of market share.

And it has plans to expand through acquisition.

A lot of the new business is from cost-conscious women, Timoteo notes.

For your membership fee, Car Cost Canada researches up to five vehicles you’re interested in, with bonuses if you fill out website surveys down the road. Members can also share the information they get with friends and family.

New Chevy Equinox owner Aaron Welch couldn’t be happier that he signed up for the service, saying it saved him “a pile of money.”

After he presented seven different dealerships with the information he got from Car Cost Canada, he figures he saved about $1,500 on his 2010 vehicle at a Chevrolet dealer in Mississauga.

“I thought people would laugh at me when I went in. One of them didn’t want to deal with me, but the rest appreciated that I was informed and knew I would negotiate a fair price,” Welch says.

“On my last car, a Pontiac Sunfire, I paid full sticker price and I got totally ripped off because I had no idea about pricing.”

There are different types of cash incentives, Timoteo explains. Automakers can discount the car’s suggested retail price and offer rebates to buyers over and above that amount. There is everything from loyalty bonuses to rebates for recent graduates and military personnel.

As well, the factory can offer rebates directly to dealers. Many of these dealer incentives are rarely advertised, so buyers should do their homework.

Car Cost Canada also provides members with a list of 150 recommended dealerships across the country, including 45 in the GTA. These dealerships have high ratings from members and are receptive to the process. Some dealers, fearing lower profits on sales, are not.

Timoteo recommends members offer a profit of 3 to 5 per cent to the dealer.

Welch, for example, paid the higher end of that range because he liked the salesman – and the fact that there was mutual respect in their transaction.

Timoteo says he doesn’t understand why some dealerships don’t want to get on board.

Dealers, on average, make a profit of 8 per cent to 10 per cent on the sale of a new car. At least with the Car Cost Canada way, dealers are assured a sale, he notes.

“One out of 10 visits to a dealership will result in the customer actually walking out with keys in their hand,” he says. “This way, it’s simple and easy and everyone knows what they’re getting.”

Tony Bellisario, sales manager at Westowne Mazda in Toronto, is all for it.

“The benefit is that you get the leads. It simplifies getting the customer through the door,” he says.

“It’s seamless. Everyone knows what they’re getting.”

Timoteo does not guarantee a minimum for the savings his members get, but estimates it is an average of $1,000, depending on the make of the vehicle.

“The car brokers are worried we are going to put them out of business because this is self service,” he says.

“It’s like an online discount brokerage versus a full-service broker.”

Q. What were your total sales and profits in the last year?

Q. How much seed capital did you have when you launched and where did you get it?

Q. What’s been your biggest success/failure so far?

Q. What are the biggest challenges facing your business?

Teaching new car buyers and new car dealers that buying and selling can actually be an easy and stress-free experience if everyone is equally well informed and expectations are reasonable on both sides. I review daily many of the 300 to 400 member surveys we receive every month and the positive feedback is very encouraging. So I believe we are making a real difference.