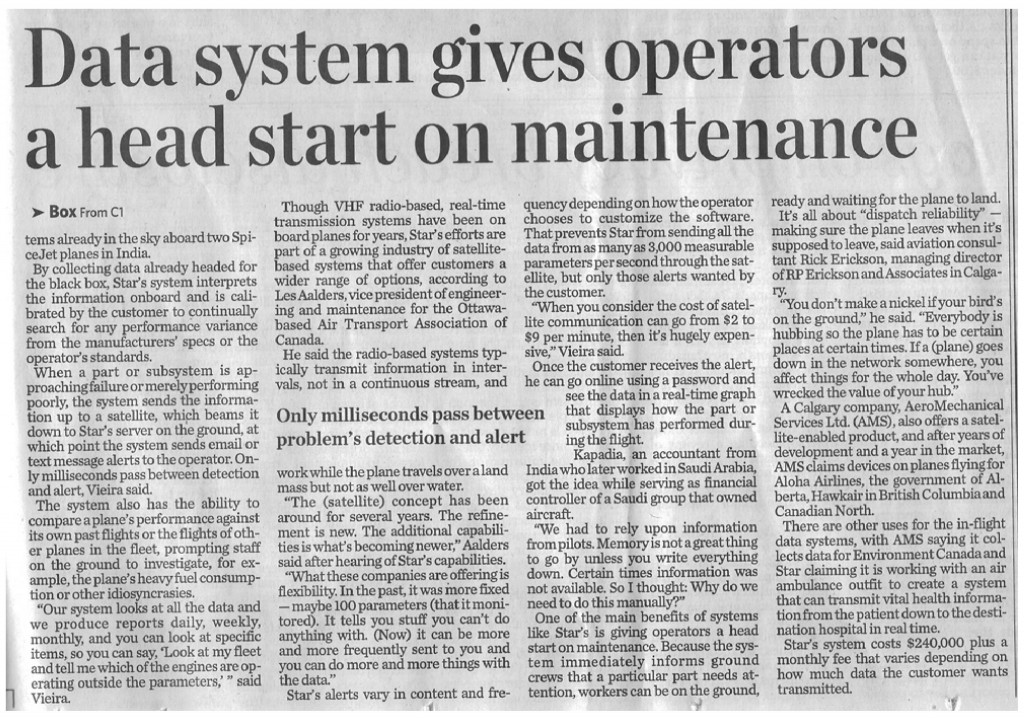 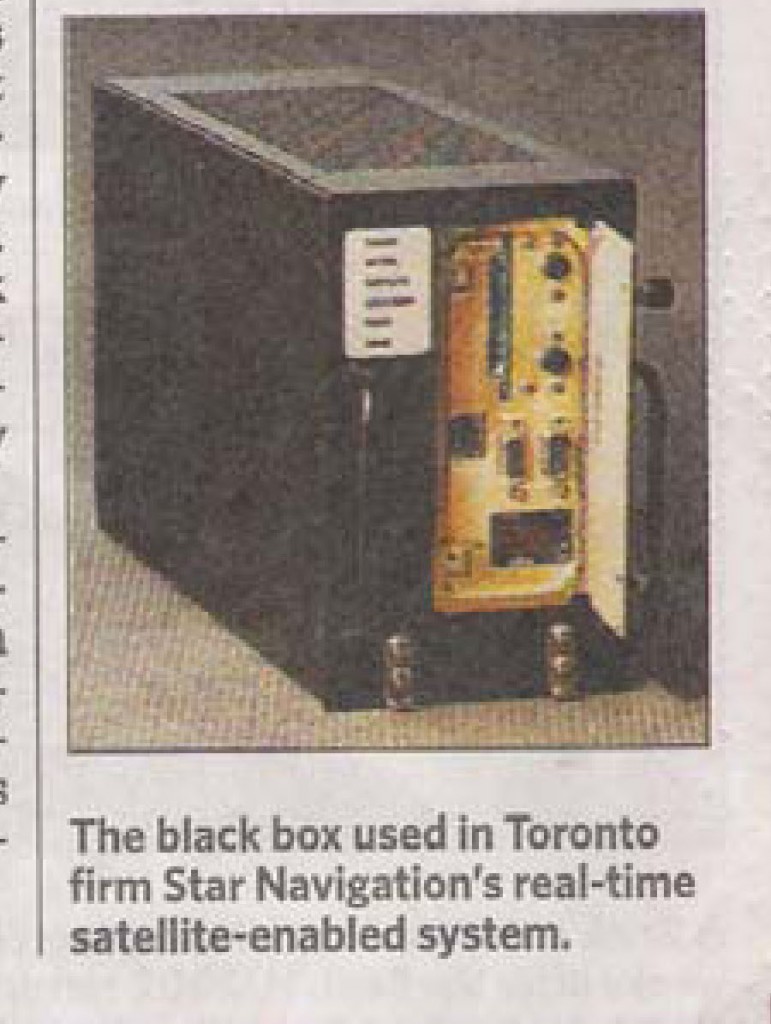 A boost for in-flight data systems

After toying with the idea for years, accountant Viraf Kapadia called a meeting of prospective partners at a Golden Griddle on Dixie Road Nov. 17, 1998. Among the group was software expert and friend Hilary Vieira. Over breakfast they agreed the time was right and technology available to make a run at building Kapadia’s vision of a satellite-enabled, real-time “black box.”

It would be a device that not only stored data but allowed aircraft operators to track a plane’s performance while it’s in the air, detect early warning signs of major in-flight problems and find subtler performance anomalies that burn money.

From low-tech beginnings, this small Toronto company, Star Navigation Systems, is now stepping out on the leading edge of in-flight data recording and transmission.

“I would say it was absolutely humble beginnings,” Kapadia said of the Golden Griddle meeting. “It was, I believe 8:30 in the morning. I remember because I had to foot the bill and I joked that the next time they would pay.”

Star Navigation, with Kapadia — a self-described “bean counter” — at the helm and Vieira as president, was born.

Now, from their small office on Lakeshore Blvd. W., after years of development and gauging interest at international air shows, the guys at Star can claim their “first kill,” with their systems already in the sky aboard two SpiceJet planes in India.

By collecting data already headed for the black box, Star’s system interprets the information onboard and is calibrated by the customer to continually search for any performance variance from the manufacturers’ specs or the operator’s standards.

When a part or subsystem is approaching failure or merely performing poorly, the system sends the information up to a satellite, which beams it down to Star’s server on the ground, at which point the system sends email or text message alerts to the operator. Only milliseconds pass between detection and alert, Vieira said.

The system also has the ability to compare a plane’s performance against its own past flights or the flights of other planes in the fleet, prompting staff on the ground to investigate, for example, the plane’s heavy fuel consumption or other idiosyncrasies.

“Our system looks at all the data and we produce reports daily, weekly, monthly, and you can look at specific items, so you can say, `Look at my fleet and tell me which of the engines are operating outside the parameters,’ ” said Vieira.

Though VHF radio-based, real-time transmission systems have been on board planes for years, Star’s efforts are part of a growing industry of satellite-based systems that offer customers a wider range of options, according to Les Aalders, vice president of engineering and maintenance for the Ottawa-based Air Transport Association of Canada.

He said the radio-based systems typically transmit information in intervals, not in a continuous stream, and work while the plane travels over a land mass but not as well over water.

“The (satellite) concept has been around for several years. The refinement is new. The additional capabilities is what’s becoming newer,” Aalders said after hearing of Star’s capabilities.

“What these companies are offering is flexibility. In the past, it was more fixed — maybe 100 parameters (that it monitored). It tells you stuff you can’t do anything with. (Now) it can be more and more frequently sent to you and you can do more and more things with the data.”

Star’s alerts vary in content and frequency depending on how the operator chooses to customize the software. That prevents Star from sending all the data from as many as 3,000 measurable parameters per second through the satellite, but only those alerts wanted by the customer.

“When you consider the cost of satellite communication can go from $2 to $9 per minute, then it’s hugely expensive,” Vieira said.

Once the customer receives the alert, he can go online using a password and see the data in a real-time graph that displays how the part or subsystem has performed during the flight.

Kapadia, an accountant from India who later worked in Saudi Arabia, got the idea while serving as financial controller of a Saudi group that owned aircraft.

“We had to rely upon information from pilots. Memory is not a great thing to go by unless you write everything down. Certain times information was not available. So I thought: Why do we need to do this manually?”

One of the main benefits of systems like Star’s is giving operators a head start on maintenance. Because the system immediately informs ground crews that a particular part needs attention, workers can be on the ground, ready and waiting for the plane to land.

It’s all about “dispatch reliability” — making sure the plane leaves when it’s supposed to leave, said aviation consultant Rick Erickson, managing director of RP Erickson and Associates in Calgary.

“You don’t make a nickel if your bird’s on the ground,” he said. “Everybody is hubbing so the plane has to be certain places at certain times. If a (plane) goes down in the network somewhere, you affect things for the whole day. You’ve wrecked the value of your hub.”

A Calgary company, AeroMechanical Services Ltd. (AMS), also offers a satellite-enabled product, and after years of development and a year in the market, AMS claims devices on planes flying for Aloha Airlines, the government of Alberta, Hawkair in British Columbia and Canadian North.

There are other uses for the in-flight data systems, with AMS saying it collects data for Environment Canada and Star claiming it is working with an air ambulance outfit to create a system that can transmit vital health information from the patient down to the destination hospital in real time.

Star’s system costs $240,000 plus a monthly fee that varies depending on how much data the customer wants transmitted.