WEB STORY:  Our client, netTALK was featured in a story about the netTALK DUO and VOIP on DigitalJournal.com. 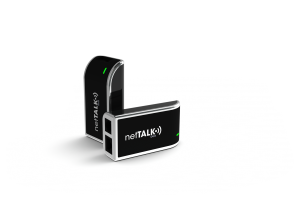 The netTALK Duo offers an impressive list of services for Canadians and is persuasive when it presents itself as a substitute for your landline.

Voice over Internet Protocol, or VoIP, seemed like a godsend in 2004, when commercial service providers decided there were enough broadband users to make it work.

Although a number of corporate customers have subscribed to it in one form or another, it has never really taken off among residential users like it seemed it should. Perhaps it was because it relied on electrical power, which was never as reliable as telephone land lines, or on computers, which seemed too impermanent, or perhaps because the explosion of cellphones distracted customers from VoIP.

Whatever the reason, these days you can buy a VoIP dongle for $50 or $60 and run it through your computer or home router — another thing few people had back in 2004— and for less than $40 a year you could call anywhere in the United States and Canada. At those prices, you’d expect that most people would jump at it. Still, the uptake has been slow, though the arrival of a dongle called the netTALK Duoa while ago proved a lot of competition to another dongle, the MagicJack, which had earlier dominated the market.

Over the past year or so, the two have been playing reverse leapfrog, cutting their prices to compete in a classic example of the capitalist marketplace at work. The original price of the netTALK Duo and one year of service was $79.95 before it was cut to $59.95 in late January, including the first year of service. Each subsequent year costs $39.95.

Though the MagicJack has had considerable publicity, the netTALK Duo has had little until a major push last fall was launched in Canada, with a couple of Canadian-only services, which now makes the netTALK Duo really worth looking at.

The netTALK Duo (http://www.nettalk.com/howduoworks) is a small device the size of a half-deck or cards, with a power cord on one end and, on the other, a port for an Ethernet cable and one for the standard (RJ-11) phone jack. Plug the Ethernet cable into a router (or computer, if you must), and a standard landline phone into the dongle. Go to netTALK’s website, select one of four area codes, one of three local exchanges and you will be presented with your remaining four digits. The phone will give you a short ring when it connects, usually within seconds.

For its part, the MagicJack is a USB device, meaning it requires a computer to run.

The beauty of either of these devices is that they’re small enough for you to carry them on road trips and put them between a hotel’s telephone and the hotel room’s Ethernet port, avoiding those horrendous charges hotels make on your phone bill.

There are several similar VoIP gadgets on the market, but only the MagicJack and netTALK Duo are available in Canada (in the U.S., you can get similar units from Ooma, Vonage and Comcast). Both devices offer 411 directory assistance, call waiting, caller ID, visual voicemail, voicemail to e-mail, online account management, conference calling and a smartphone app (available from iTunes, it works with iOS, Android, Blackberry, or Windows Mobile and allows you to make outgoing calls using your cellphone handset working with netTALK’s Internet connection, which allows you to avoid roaming charges). Also, neither service provider requires long-term contracts or monthly bills. The netTALK Duo raises the ante by adding live tech support (long a sore point among magicJack users), Canadian 911 emergency service, call forwarding, faxing, video calling and working with either a computer or router (using the Wi-Fi, Edge, 3G and 4G protocols). This last feature is particularly important because if you use it with your router, you can shut your computer down to save energy.

For its part, magicJack costs less ($49.99) than netTALK ($59.95), and annual fees after the first year are also lower ($29.95) compared to netTALK ($39.95). But netTALK argues there’s a major difference in energy savings, based on the assumption that magicJack will cost almost $15 a month with the computer running around the clock, while netTalk is less than $4 a month, based on a practice of shutting down your computer at night and running it through your router.

There is also an International Add-On, which for $120 per year allows calls to 60 additional countries.

In my tests, the netTALK Duo works as well as any VoIP telephone, with the added advantage of working with my router. It was excellent with local calls at any time of day, though I experienced a few gaps (due to packet loss) at Internet peak-usage times. The sound quality is about the same as with landline phones, which is to say barely acceptable.

Human hearing ranges from 20 to 20,000 cycles per second (hertz); landline telephone companies want to squeeze more phone circuits into a single wire, so they chop off frequencies lower than 350 hertz and higher than 3,400 hertz, making the voices you hear have that tinny sound.

This is all very well and good, but you’d think that in the digital age cellphone and VoIP phone makers would have figured out how to improve sound quality on all their phones — or at least something better than 350 to 3,400 hertz we had on landlines. I note that whatever advances have been made in sound quality have not been dramatically successful, otherwise their advertising would have been crowing about it.

Still, it has a lot to offer, especially the low cost. I now have the netTALK phone line in addition to my cellphone and land line and plan to use it only because the number of times I call in North America more than makes up for the cost within a month or two.