NEWSPAPER STORY Our client, Bill Bishop, Vice President Of Marketing And Communications of 4Refuel was interviewed for a story about why gas prices are so high.

CLICK HERE TO READ STORY FROM PDF OR SCROLL DOWN 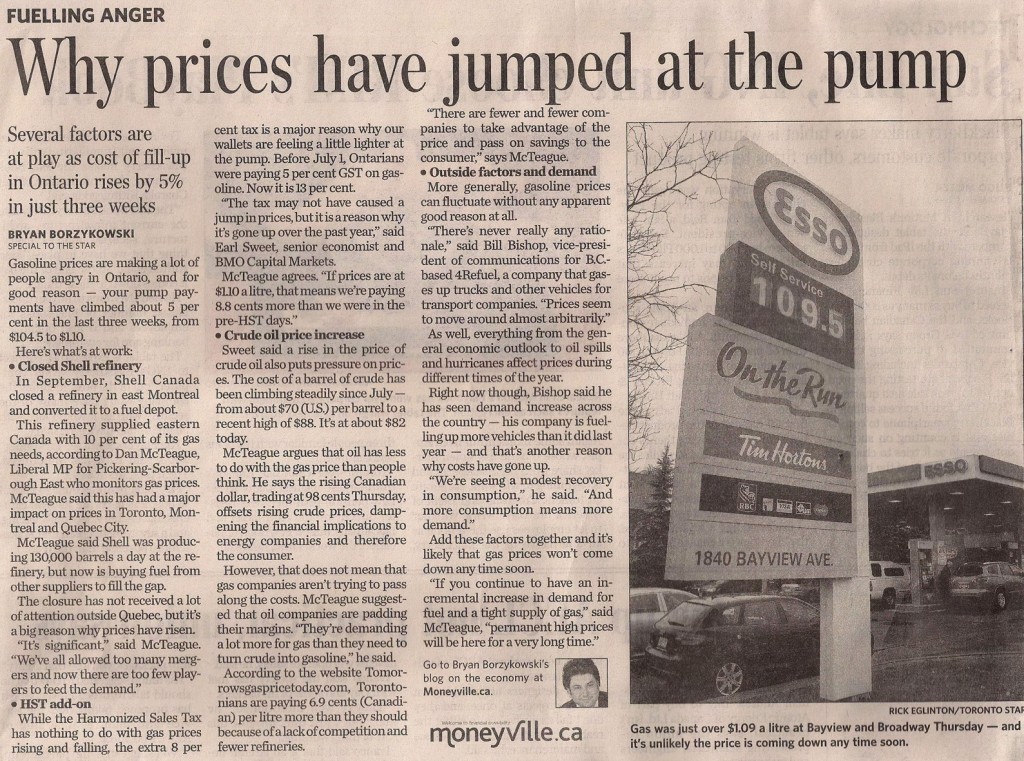 November 17, 2010 By Bryan Borzykowski  Gas prices are on the rise again as this Esso station at Bayview Ave and Broadway St. shows.

Gas prices are making a lot of people angry in Ontario, and for good reason — your pump payments have climbed about 5 per cent in  the last three weeks, from $104.5 to $1.10.

In September, Shell closed a Montreal refinery and converted it to a fuel depot. This refinery supplied eastern Canada with 10 per cent of its gas needs according to Dan McTeague, a Liberal MP for Pickering. McTeague says this has had a major impact on prices in Toronto, Montreal and Quebec City.

McTeague says Shell was producing 130,000 barrels a day at the refinery, but now is buying fuel from other suppliers to fill the gap.

The closure hasn’t received a lot attention, but it’s a big reason why prices have climbed. “It’s significant,” says McTeague, “we’ve all allowed too many mergers and now there are too few players to feed the demand.”

While the HST has nothing to do with gas prices rising and falling, the extra 8 per cent tax  is a major reason why our wallets are feeling a little lighter at the pump. Before July 1 Ontarians were paying 5 per cent GST on gasoline. Now it is 13 per cent.

“The tax may not have caused a jump in prices, but it is a reason why it’s gone up over the past year,” says Earl Sweet, senior economist and BMO Capital Markets.

Sweet says a  rise in oil also puts pressure on prices. The cost of a barrel of crude has been climbing steadily since July — from about $70 per barrel to a recent high of $88. It’s at about $82 today.

McTeague argues that oil  has less to do with the gas price than people think.  He says a rising Canadian dollar offsets rising crude prices, dampening the financial implications to the fuel companies and, therefore the consumer.

However, that doesn’t mean gas companies aren’t trying to pass along the cosrts. McTeague suggests that oil companies are padding their margins. “They’re demanding a lot more for gas than they need to turn crude into gasoline,” he says.

According to the website Tomorrowsgaspricetoday.com, Torontonians are paying 6.9 cents more than they should because of a lack of competition and fewer refineries.

“There are fewer and fewer companies to take advantage of the price and pass on savings to the consumer,” says McTeague.

Outside factors and demand

More generally, gas prices can fluctuate without any good reason at all. “There’s never really any rational,” says Bill Bishop, vice-president of communications for B.C.-based 4Refuel, a company that gasses up trucks and other vehicles for transport companies. “Prices seem to move around almost arbitrarily.”

Everything from the general economic outlook to oil spills and hurricanes could have an affect on prices during different parts of the year too.

Right now though, Bishop has seen demand increase across the country — his company is fueling up more vehicles than they did last year — and that’s another reason why costs have gone up.

Add all these factors together and it’s likely gas prices won’t come down any time soon. “If you continue to have an incremental increase in demand for fuel and a tight supply of gas,” says McTeague, “permanent high prices will be here for a very long time.”