Newspaper Story Our client, Kennedy Wilson Auction Group was featured in a news story about an upcoming auction in  Rolling Hills, California.

Click Here To Read Story from PDF or scroll down below 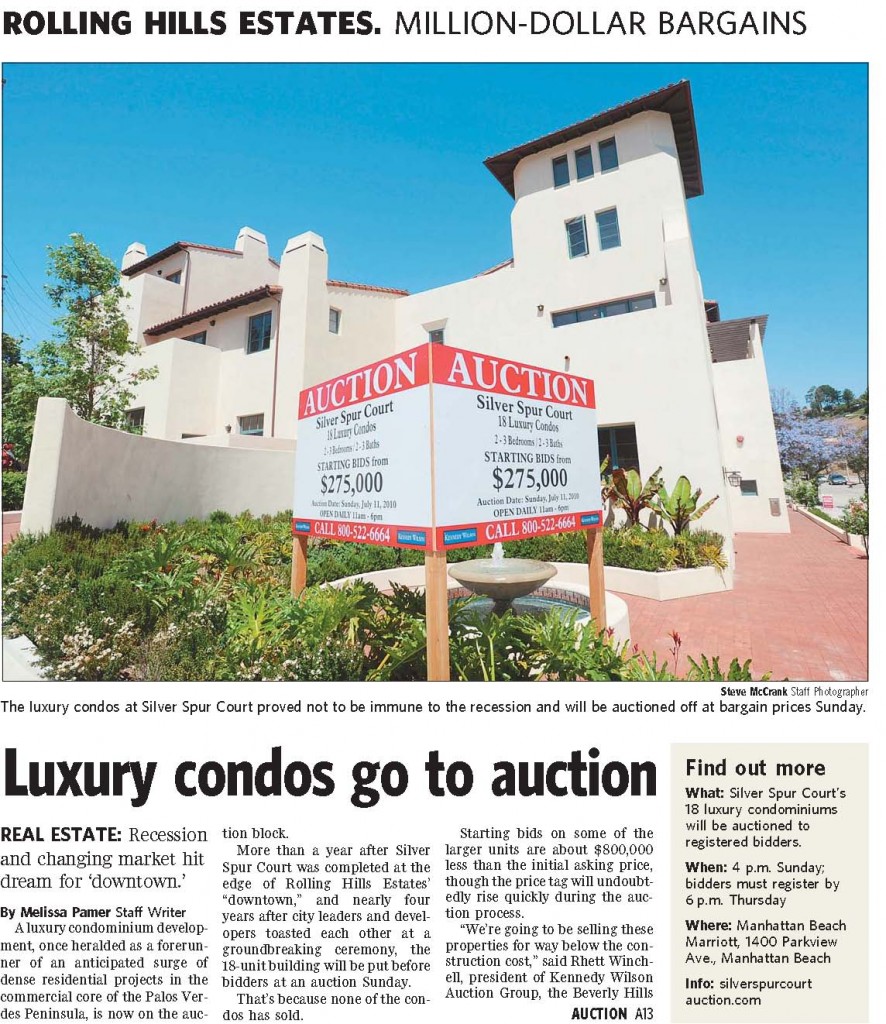 Silver Spur Court,a luxury condo complex in Rolling Hills Estates, was in the forefront of the city’s expected redevelopment in its downtown area. However, none of the units has sold and they are now going to auction. (Steve McCrank/Staff Photographer)

A luxury condominium development, once heralded as a forerunner of an anticipated surge of dense residential projects in the commercial core of the Palos Verdes Peninsula, is now on the auction block.

More than a year after Silver Spur Court was completed at the edge of Rolling Hills Estates’ “downtown,” and nearly four years after city leaders and developers toasted each other at a groundbreaking ceremony, the 18-unit building will be put before bidders at an auction on Sunday.

That’s because none of the condos has sold.

Starting bids on some of the larger units are about $800,000 less than the initial asking price, though the price tag will undoubtedly rise quickly during the auction process.

“We’re going to be selling these properties for way below the construction cost,” said Rhett Winchell, president of Kennedy Wilson Auction Group, the Beverly Hills company that is holding the event.

The developers of Silver Spur Court began their project – which earned approval from Rolling Hills Estates in 2004 – as the real estate market was amid a delirious climb. Then housing values tanked and interest waned in $1 million townhouses where a McDonald’s once stood at the busy intersection of Silver Spur Road and Crenshaw Boulevard.

“Like most builders, they anticipated the market prices when they started the project, and ultimately the market changed on them,” Winchell said. “The asking prices – that probably also hindered some

of their success. Now with the auction itself, we can ultimately sell them for less.”Originally priced from $930,000 to $1.7 million, the high-end units at Silver Spur Court are centered around two open courtyards on four-fifths of an acre. They’re two- and three-bedroom flats and townhomes, ranging from 1,600 square feet to about 2,800 square feet.

Starting bids now range from $275,000 to $495,000. A Rolling Hills Estates city official said buyers need to be forewarned about a $11,885 per-unit city parks fee that must be paid before escrow can close.

The Spanish Colonial Revival-styled project was designed by architect Stefanos Polyzoides – a major proponent of a movement to create walkable, mixed-use urban developments.

Along with Rolling Hills Villas, a nearby 41-unit condo development catering to seniors, Silver Spur Court was welcomed by local leaders as the vanguard of a plan to bring vitality to a dowdy business district by infusing it with residential life.

Five projects with a total of 208 units have been approved along Deep Valley Drive and Silver Spur Road, but only Silver Spur Court and Rolling Hills Villas are complete. Another project with 148 units is going through an environmental review after its initial developer went into bankruptcy.

In 2007, under pressure from residents concerned about parking and traffic, the Rolling Hills Estates City Council rejected a broad plan for mixed-use development of the “Peninsula Village.” It had offered a major departure for the equestrian-friendly bedroom community, frightening some residents and local business owners.

City Councilman Frank Zerunyan said the acrimony related to the plan was overblown.

“I never believed that we were going to put on the marketplace – in Silver Spur Court or elsewhere – several hundred units in our community,” Zerunyan said. “I never thought that market would permit such a thing. … It’s going to take years for the area to develop. The absorption rate is impossible.”

Residential projects were either already approved or won council backing because they fit within existing codes that allow 22 units per acre in the commercial zone.

“I think the vision was definitely endorsed in terms of allowing the area to rehab itself,” said David Wahba, the city’s planning director. “Unfortunately, it hasn’t had an opportunity to take off. Once a number of these projects are built, we’ll be better able to gauge how the residential will be received.”

Last year, in light of national economic woes that have brought residential development to a halt, the City Council gave developers an extension on their building permits, Wahba said.

That’s been a boon to Rolling Hills Villas owner Wynne Development Co., which has plans for a 75-unit luxury project known as Mediterranean Village that was approved in 2008 and is still awaiting financing.

Brian Wynne, the project manager for Rolling Hills Villas, said 10 or fewer units remain for sale. He said catering to a niche market – owners must be 55 and over – has helped the project attract potential buyers during a difficult climate.

Promotion of the auction for Silver Spur Court has drawn interest in Rolling Hills Villas, Wynne said. Real estate developers and agents on The Hill are closely observing the fate of the project, he added.

“We’re just like everybody else, curious and watching,” Wynne said.

Winchell, from the auction group, said his company has received a lot of interest in the Silver Spur Court units. Last weekend, more than 100 potential buyers showed up at a how-to-bid event.

Kennedy Wilson was called in because the owners were hoping to sell out the inventory in one day, Winchell said. He would not say if there was a minimum goal price for individual units – a source of speculation for local real estate professionals.

The development had difficulty selling because of a stringent requirement from mortgage giant Fannie Mae that 51 percent of condo units be in escrow before buyers’ loans would be guaranteed, Winchell said.

Others on the Palos Verdes Peninsula pointed to problems with the project’s financing. Construction was funded with a loan from Corus Bank, the Chicago lender that was taken over by the federal government last year, throwing another client, Terranea Resort in Rancho Palos Verdes, into financial difficulty.

Several lawsuits against the developers were dismissed earlier this year, court records show.

Representatives of development partner Concert Realty and other partners did not return calls for comment. Winchell said he spoke on behalf of the developers.

Zerunyan, a lawyer who works in real estate development, said he believes Silver Spur Court may have had a fatal flaw from the beginning.

“I believe these folks built on a basis of a dream more so than on the basis of a marketplace,” said Zerunyan, who stressed that he appreciated having a high-quality project in his city.

“It’s not the right product for this community. It’s a gorgeous, absolutely magnificent property as far as the amenities are concerned, and the products that are used are top notch. But you’ve got to go with the marketplace.”

What: Silver Spur Court’s 18 luxury condominiums will be auctioned to registered bidders.

When: 4 p.m. Sunday; bidders must register by 6 p.m. Thursday