Newspaper Story: Our client, Kennedy Wilson Auction Group was featured  in a news story  about an upcoming Auction in Calgary Alberta. 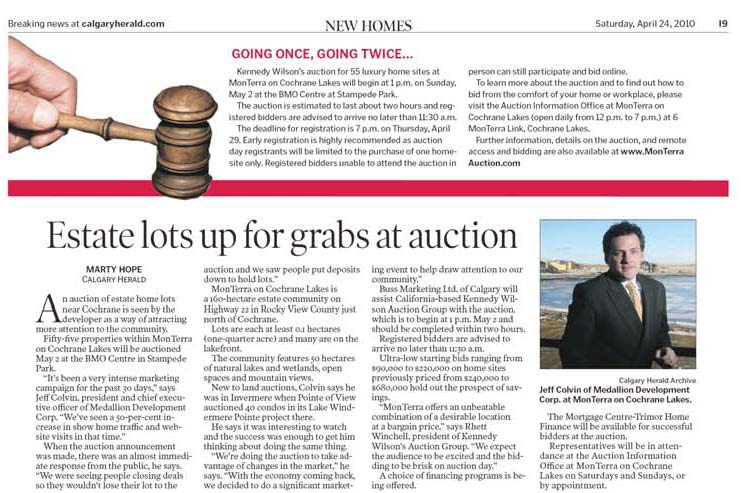 click Here to Read From PDF or read below

Estate lots up for grabs at auction

An auction of estate home lots near Cochrane is seen by the developer as a way of attracting more attention to the community.

Fifty-five properties within MonTerra on Cochrane Lakes will be auctioned May 2 at the BMO Centre in Stampede Park.

“It’s been a very intense marketing campaign for the past 30 days,” says Jeff Colvin, president and chief executive officer of Medallion Development Corp. “We’ve seen a 50-per-cent increase in show home traffic and web-site visits in that time.”

When the auction announcement was made, there was an almost immediate response from the public, he says. “We were seeing people closing deals so they wouldn’t lose their lot to the auction and we saw people put deposits down to hold lots.”

MonTerra on Cochrane Lakes is a 160-hectare estate community on Highway 22 in Rocky View County just north of Cochrane.

Lots are each at least 0.1 hectares (one-quarter acre) and many are on the lakefront.

New to land auctions, Colvin says he was in Invermere when Pointe of View auctioned 40 condos in its Lake Windermere Pointe project there.

He says it was interesting to watch and the success was enough to get him thinking about doing the same thing.

“We’re doing the auction to take advantage of changes in the market,” he says. “With the economy coming back, we decided to do a significant marketing event to help draw attention to our community.”

Buss Marketing Ltd. of Calgary will assist California-based Kennedy Wilson Auction Group with the auction. which is to begin at 1 p.m. May 2 and should be completed within two hours.

Registered bidders are advised to arrive no later than 11:30 a.m.

“MonTerra offers an unbeatable combination of a desirable location at a bargain price,” says Rhett Winchell, president of Kennedy Wilson’s Auction Group. “We expect the audience to be excited and the bidding to be brisk on auction day.”

A choice of financing programs is being offered.

The Mortgage Centre-Trimor Home Finance will be available for successful bidders at the auction.

Representatives will be in attendance at the Auction Information Office at MonTerra on Cochrane Lakes on Saturdays and Sundays, or by appointment.