Menu
No Comments
Newspaper Story: Our client, Kennedy Wilson Auction Group was featured  in a news story  about an upcoming Auction in Calgary Alberta.
Click Here To Read From PDF 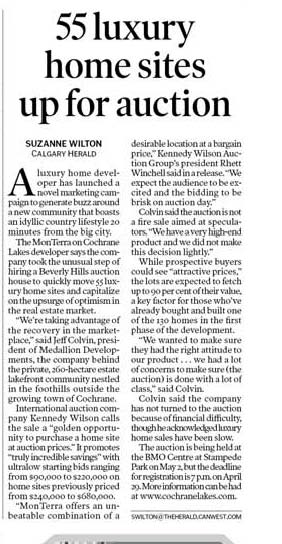 55 luxury home sites up for auction

By Suzanne Wilton, Calgary HeraldApril 17, 2010 2:07 AM
A luxury home developer has launched a novel marketing campaign to generate buzz around a new community that boasts an idyllic country lifestyle 20 minutes from the big city.

The MonTerra on Cochrane Lakes developer says the company took the unusual step of hiring a Beverly Hills auction house to quickly move 55 luxury home sites and capitalize on the upsurge of optimism in the real estate market.

“We’re taking advantage of the recovery in the marketplace,” said Jeff Colvin, president of Medallion Developments, the company behind the private, 260-hectare estate lakefront community nestled in the foothills outside the growing town of Cochrane.

International auction company Kennedy Wilson calls the sale a “golden opportunity to purchase a home site at auction prices.” It promotes “truly incredible savings” with ultralow starting bids ranging from $90,000 to $220,000 on home sites previously priced from $240,000 to $680,000.

“MonTerra offers an unbeatable combination of a desirable location at a bargain price,” Kennedy Wilson Auction Group’s president Rhett Winchell said in a release. “We expect the audience to be excited and the bidding to be brisk on auction day.”

Colvin said the auction is not a fire sale aimed at speculators. “We have a very high-end product and we did not make this decision lightly.”

While prospective buyers could see “attractive prices,” the lots are expected to fetch up to 90 per cent of their value, a key factor for those who’ve already bought and built one of the 130 homes in the first phase of the development.

“We wanted to make sure they had the right attitude to our product . . . we had a lot of concerns to make sure (the auction) is done with a lot of class,” said Colvin.

Colvin said the company has not turned to the auction because of financial difficulty, though he acknowledged luxury home sales have been slow.

The auction is being held at the BMO Centre at Stampede Park on May 2, but the deadline for registration is 7 p.m. on April 29. More information can be had at www.cochranelakes.com.