Newspaper Story Our client, Kennedy Wilson Auction Group held an auction in Portland Oregon.  This auction was featured  in a news story  in Oregonia. Kennedy Wilson’s client Realty Trust is quoted in this story rather than Kennedy Wilson directly.

On auction block, John Ross condos go for half off boomtime prices 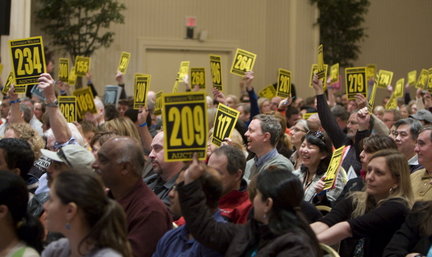 Bidders get to practice before Sunday’s auction of condos at South Waterfront’s John Ross building. Hundreds showed up at the Hilton Portland for the sale of the properties, which went at steep discounts because of the housing slump.

Shalene Murphy braved the ear-rattling auctioneer and cranked-up music Sunday to hunt for a bargain on her first home.

The 39-year-old medical social worker came to the auction hoping to score a one-bedroom place in the city’s biggest condo tower, the John Ross.

Her reality: The bidding whisked past her.

“I did raise my paddle a couple of times, but it was like that fast,” she said, snapping her fingers. “Within 30 seconds, it was outside my range.”

The bidding was brisk and the discounts were deep at Portland’s third major real estate auction of the recession. Prudential Real Estate Investors, which has primary control of the tower, sold 47 condos in South Waterfront’s  John Ross building in less than two hours.

That was more sales than the owners had made in the previous five months. But they also came at steep discounts.

Compared with the prices at the height of the real estate boom, the auction bidders took home condos at an average 50 percent discount.

The John Ross condos were listed for an average of $711,000 during the top of the housing market. They sold Sunday for about $316,000, according to winning bids announced at the auction.

Despite the discounts, the sell-off moves the lender closer to getting the John Ross off its books and to its goal of selling out the 303-unit building by the end of 2010. The auction sales also will reduce the lender’s costs for property taxes and insurance. If all the sales close, the auction will have produced $14.8 million in sales.

“We’re pleased with how it went,” said Todd Prendergast, a principal director at Realty Trust City, the firm selling the building.

The futuristic John Ross started as one of the most promising projects during Portland’s condo craze. In 2005 when sales opened, 229 potential buyers put down deposits.

But five years, one recession and dozens of failed sales later, the building had only 224 closed sales before the auction.

The auction will provide another benchmark for how far the downtown high-rise condo market has tumbled.

More than 750 people turned out for the auction, filling a basement conference room and then some at the downtown Hilton. The crowd was diverse in age and ethnicity. There were flashy real estate brokers, hipsters with bike helmets and retired couples searching for a second home.

Men in suits, part of the auction crew, hustled through the aisles and cajoled bidders. They waved their arms, whooping to note a fresh bidder for the auctioneer.

The auctioneers bellowed out the deals, discounts and drama. They sold the buyers on Mount Hood views, quartz countertops and white oak floors stained in butterscotch.

“Now is the time to stop and think what you’re paying here,” the auctioneer hollered. “This is a great buy.”

By the time the auctioneer finished, the condo sold for nearly $670,000.

That 30th-floor unit had been priced as high as $2.5 million, making it the biggest discount of the day, at 66 percent off.
Ryan Frank