Newspaper Story: Our client, Kennedy Wilson Auction Group held an auction in Portland Oregon.  This auction was featured  in a news story  in the Oregonian.  Kennedy Wilson’s client Realty Trust is quoted in this story rather than Kennedy Wilson directly. 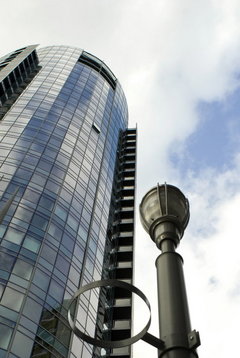 And above the street, the John Ross building wails, in fire-sale red: “AUCTION.”

The South Waterfront sell off continues this weekend.

Since 2003, developers and the City of Portland have turned the mostly vacant industrial district into towering condos and apartments. But the housing collapse and credit crisis have walloped the neighborhood with slow sales and mortgage defaults.

The lender who controls the John Ross on Sunday will try to unload 50 units in a two-hour sales blitz. The auction will provide another benchmark for how far the condo market has collapsed since its 2007 peak.

The round 31-story tower cuts a bold image just off the Willamette River, but the John Ross has been hit particularly hard by the recession. Sales opened in 2005 when buyers were desperate to lock up high-rise condos as investments. But the building finished in 2007 just as the subprime market nose-dived.

In 2005, 229 potential buyers had put down deposits. But 77 eventually backed out and sales slowed to a trickle. Three years after the building finished, the 303-unit John Ross is still only 75 percent sold.

That’s why the lender turned to the auction. The lender’s goal is to use the auction to sell out the project in 2010, said Patrick Clark, a Portland real estate broker working on the sales.

The model for real estate auctions is to use low minimum bids and an advertising blitz to generate fresh sales leads. The sell-off could also eventually cut the expense of taxes and insurance costs for the lender currently stuck with the bill.

The John Ross auction comes seven months after the Atwater Place — a more upscale glass cube across the street — sold off 40 condos in a similar auction.

The company that has primary control of the John Ross, Block 35 Investors LLC, is now run by senior lender Prudential Real Estate Investors, an arm of the Prudential life insurance company.

When: 1 p.m. Sunday. Bidders should arrived no later than noon. The auction should take about two hours.

For more information: Follow the auction live on Sunday, at blog.oregonlive.com/ frontporch.

And for much more: Check out a previous post that provides all you wanted to know on the John Ross auction and more.

The Atwater Place is primarily controlled by a lender, too.

In both cases, the lenders exerted control of the projects after sales failed to meet original expectations.

South Waterfront’s auction frenzy contrasts with the luxury image the developers originally crafted for the neighborhood.

John Ross resident Nichole Connelly said she expects the auction to effect her condo value. She bought a sixth-floor condo in spring 2008 for $280,000. Her one-bedroom condo covers 780 square feet. “I probably bought a little bit too early,” Connelly said.

A condo down the hall is up for auction. It’s bigger at 1,200 square feet and has a study.

The winning bid at auctions are typically far higher than the starting price. At the Atwater Place auction, the winning bids were roughly 40 percent higher.

Even so, the sale price on that sixth-floor John Ross condo is likely to be far less than Connelly paid.

Despite the troubles, Connelly said still likes living in the neighborhood and says the auctions reflect the realities of a downbeat market.

“It’s just kind of how things are right now,” she said. “We knew this was probably going to happen.”