Newspaper Story: Our client, Kennedy Wilson Auction Group was featured in a  story about an upcoming Auction in Tempe, Arizona. 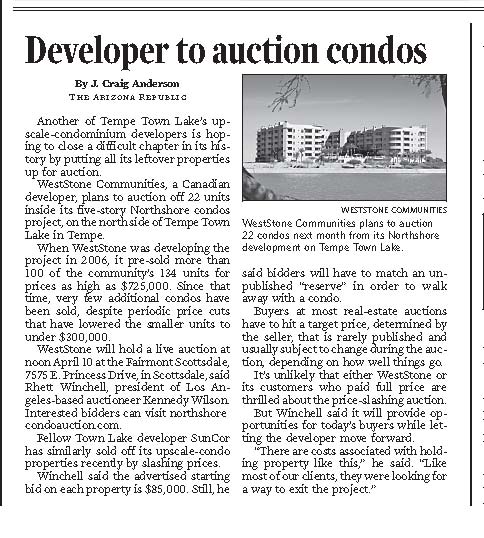 Another of Tempe Town Lake’s upscale-condominium developers is hoping to close a difficult chapter in its history by putting all its leftover properties up for auction.

WestStone Communities, a Canadian developer, plans to auction off 22 units inside its five-story Northshore condos project, on the north side of Tempe Town Lake in Tempe.

When WestStone was developing the project in 2006, it pre-sold more than 100 of the community’s 134 units for prices as high as $725,000. Since that time, very few additional condos have been sold, despite periodic price cuts that have lowered the smaller units to under $300,000.

Winchell said the advertised starting bid on each property is $85,000. Still, he said bidders will have to match an unpublished “reserve” in order to walk away with a condo.

Buyers at most real-estate auctions have to hit a target price, determined by the seller, that is rarely published and usually subject to change during the auction, depending on how well things go.

It’s unlikely that either WestStone or its customers who paid full price are thrilled about the price-slashing auction.

But Winchell said it will provide opportunities for today’s buyers while letting the developer move forward.

“There are costs associated with holding property like this,” he said. “Like most of our clients, they were looking for a way to exit the project.”