Newspaper Story Our client Rhett Winchell, President Of Kennedy Wilson Auction Group  discussed the power of Real Estate Auctions and how they work.

Or scroll down to read story below 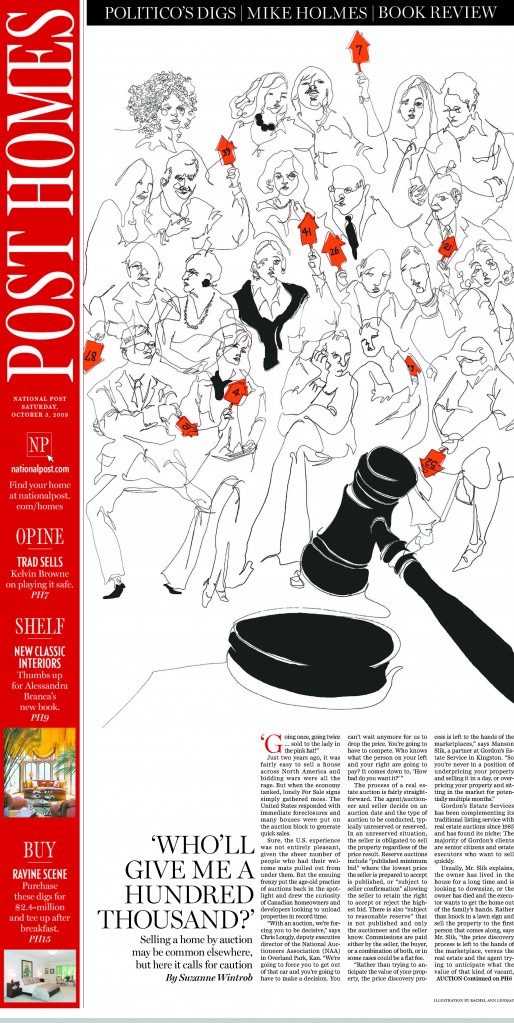 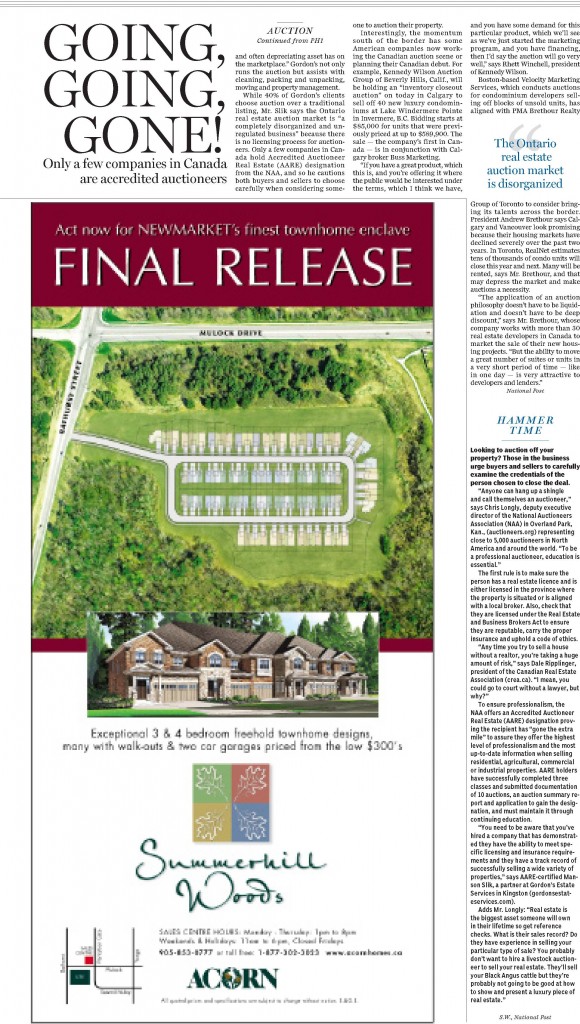 ‘Who’ll give me a hundred thousand?’

Going once, going twice … sold to the lady in the pink hat!”

Just two years ago, it was fairly easy to sell a house across North America and bidding wars were all the rage. But when the economy tanked, lonely For Sale signs simply gathered moss. The United States responded with immediate foreclosures and many houses were put on the auction block to generate quick sales.

Sure, the U.S. experience was not entirely pleasant, given the sheer number of people who had their welcome mats pulled out from under them. But the ensuing frenzy put the age-old practice of auctions back in the spotlight and drew the curiosity of Canadian homeowners and developers looking to unload properties in record time.

“With an auction, we’re forcing you to be decisive,” says Chris Longly, deputy executive director of the National Auctioneers Association (NAA) in Overland Park, Kan. “We’re going to force you to get out of that car and you’re going to have to make a decision. You can’t wait anymore for us to drop the price. You’re going to have to compete. Who knows what the person on your left and your right are going to pay? It comes down to, ‘How bad do you want it?’ “

The process of a real estate auction is fairly straightforward. The agent/auctioneer and seller decide on an auction date and the type of auction to be conducted, typically unreserved or reserved. In an unreserved situation, the seller is obligated to sell the property regardless of the price result. Reserve auctions include “published minimum bid” where the lowest price the seller is prepared to accept is published, or “subject to seller confirmation” allowing the seller to retain the right to accept or reject the highest bid. There is also “subject to reasonable reserve” that is not published and only the auctioneer and the seller know. Commissions are paid either by the seller, the buyer, or a combination of both, or in some cases could be a flat fee.

Gordon’s Estate Services has been complementing its traditional listing service with real estate auctions since 1985 and has found its niche: The majority of Gordon’s clients are senior citizens and estate executors who want to sell quickly.

Usually, Mr. Slik explains, the owner has lived in the house for a long time and is looking to downsize, or the owner has died and the executor wants to get the home out of the family’s hands. Rather than knock in a lawn sign and sell the property to the first person that comes along, says Mr. Slik, “the price discovery process is left to the hands of the marketplace, versus the real estate and the agent trying to anticipate what the value of that kind of vacant, and often depreciating asset has on the marketplace.” Gordon’s not only runs the auction but assists with cleaning, packing and unpacking, moving and property management.

While 40% of Gordon’s clients choose auction over a traditional listing, Mr. Slik says the Ontario real estate auction market is “a completely disorganized and unregulated business” because there is no licensing process for auctioneers. Only a few companies in Canada hold Accredited Auctioneer Real Estate (AARE) designation from the NAA, and so he cautions both buyers and sellers to choose carefully when considering someone to auction their property.

Interestingly, the momentum south of the border has some American companies now working the Canadian auction scene or planning their Canadian debut. For example, Kennedy Wilson Auction Group of Beverly Hills, Calif., will be holding an “inventory closeout auction” on today in Calgary to sell off 40 new luxury condominiums at Lake Windermere Pointe in Invermere, B.C. Bidding starts at $85,000 for units that were previously priced at up to $589,900. The sale – the company’s first in Canada – is in conjunction with Calgary broker Buss Marketing.

“If you have a great product, which this is, and you’re offering it where the public would be interested under the terms, which I think we have, and you have some demand for this particular product, which we’ll see as we’ve just started the marketing program, and you have financing, then I’d say the auction will go very well,” says Rhett Winchell, president of Kennedy Wilson.

Boston-based Velocity Marketing Services, which conducts auctions for condominium developers selling off blocks of unsold units, has aligned with PMA Brethour Realty Group of Toronto to consider bringing its talents across the border. President Andrew Brethour says Calgary and Vancouver look promising because their housing markets have declined severely over the past two years. In Toronto, RealNet estimates tens of thousands of condo units will close this year and next. Many will be rented, says Mr. Brethour, and that may depress the market and make auctions a necessity.

“The application of an auction philosophy doesn’t have to be liquidation and doesn’t have to be deep discount,” says Mr. Brethour, whose company works with more than 30 real estate developers in Canada to market the sale of their new housing projects. “But the ability to move a great number of suites or units in a very short period of time – like in one day – is very attractive to developers and lenders.”