NEWSPAPER STORY:  Our client, Beltone Carolina/Virginia was featured in a story about giving the gift of hearing to their patient Virginia Walters.

ROCKINGHAM — Immediately after the birth of her daughter in 1996, Virginia Walters noticed a problem: She couldn’t hear her baby crying.

She remembers it getting “really loud” in the hospital room just prior, and demanded her husband find out if the baby was breathing at all. But the baby was fine — it was Walters’ hearing that was the problem.

“There’s nothing more important than hearing your child cry — nothing,” Walters, 55, said. “If I could bring that moment back, I would raise her all over again.”

It was 13½ hours before she would hear her daughter cry for the first time, a delay that she won’t let happen again when her grandchild is born this October. This time, she’ll have her new hearing aids courtesy of the Beltone Hearing Care Foundation which donated the devices after she and Eric Hanse, a hearing instrument specialist with Beltone in Rockingham, wrote a letter detailing her struggles.

“I will not miss that cry,” she said after adjusting to the new aids Thursday afternoon.

Ever since her daughter’s birth it’s sounded like she’s underwater. Her own voice, those of her loved ones, the music at church, the chirps of her canary, Petey, have been muffled for 22 years.

Two months ago, after she realized that she could no longer take care of her family without being able to hear them, Walters — a Bennettsville, South Carolina, resident and West Virginia-native — walked into Hanse’s office for a consultation. Hanse said she had “significant” hearing loss, and that she was having to do extra work in conversation to compensate. She could never afford to buy quality hearing aids which cost thousands.

“You put the needs of your children before your own,” Walters said.

Hanse decided to try to find an alternative. The Beltone Hearing Care Foundation is a 501c3 charitable organization that donates hearing aids to those in need but are without the means to pay for them. This was the first donation the foundation has made in Rockingham.

“She has truly shown me what it means to have a loss (of hearing) and the total impact it can have on your life,” Hanse wrote in a letter to the foundation. “A person can read all about the impact of a disability but to truly grasp the impact, you have to look into their eyes. That is what I did with Mrs. Walters.”

Her impairment forced her to rely on lip-reading in conversation and putting her foot up against the speakers at church to know when the key of the music changed. She considers herself a people person who loves hearing what others have to say.

“Your hearing is special. If you can’t hear those three words (I love you), you have to lip read and you better hope you get it right — otherwise, there goes that special relationship,” Walters said.

At her job as a registrar at the hospital, she said patients are “forced to scream” their personal information to her which she worries will violate federal privacy laws if someone were to hear. At worst, she fears getting the information wrong and endangering the patient.

When she arrived at Hanse’s office shortly after noon on Thursday, she stopped in the doorway as if she’d reached the end of a long journey and said, “I’m scared to death.”

Hanse and Walters embraced in the lobby. “I told you I was going to help,” he said, while she nodded, emotional. “You have waited long enough.”

She said she had been up since 2 a.m. the night before, unable to sleep. Once in his office, Hanse opened a box revealing the two small pods with wires hanging off of them that would change her life. Once the hearing aids were in place and turned on, with Walters anxiously waiting for the first noise, she caught back-chatter from the hallway and jumped, “I can hear you!”

Walters’ emotions were too much for her and she began to cry tears of joy. Hanse spoke to her softly, “This is real.”

“You’re telling me,” she replied. “And you’re not even shouting.”

Hanse walked out in the hallway about 20 feet away and spoke at the same volume he was when they were two feet away — she heard him without any hesitation. The right-side hearing aid died at one point, but Hanse gave Walters a spare. The batteries cost about $1 each, and last four to eight days, depending on usage.

Thinking of the possibilities, Walters said she wanted to return to Niagra Falls with her family to hear the thunder of the water, and also remembered that she would need to turn her car’s radio down a few notches.

The hearing aids are able to connect to Walters’ iPhone which will allow her to control the volume of her hearing aids, as well as play music and FaceTime directly through them.

“What we’ve managed to do is connect her back to her life and the conversations she’s wanted to be in,” Hanse said.

He took a moment to reflect on his career as Walters prepared to leave. He said he never knew what he wanted to do in life, but knew he wanted to make people happy.

“Your smile is my salaray today,” Hanse said. 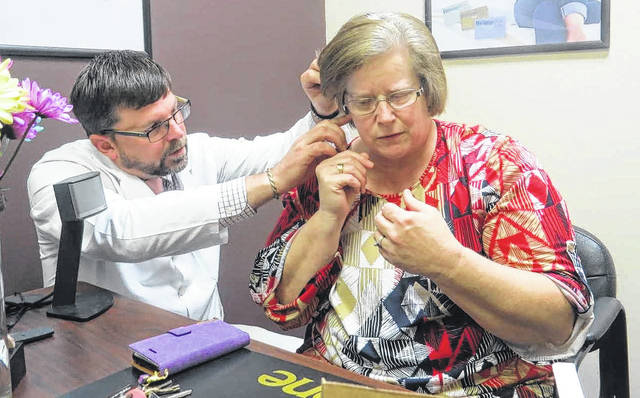 Eric Hanse, a hearing instrument specialist with Beltone in Rockingham, puts in Virginia Walters’ new hearing aids that were donated to her by the Beltone Hearing Care Foundation. 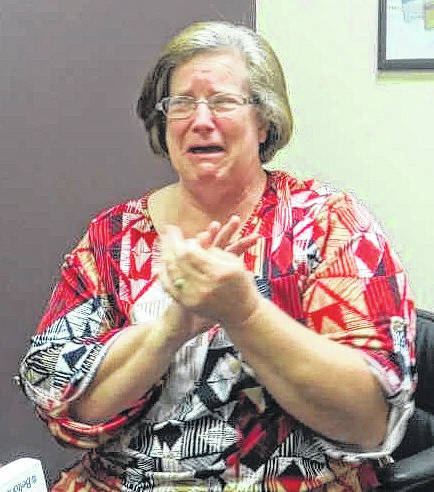 Virginia Walters reacts to the first sounds she heard with her new hearing aids in on Thursday at the Beltone office in Rockingham.