NEWSPAPER STORY:  Our client, Viraf Kapadia, CEO of Star Navigation Systems Group was interviewed in a story in The International Edition of The New York Times about Tracking Technology.

CANBERRA, Australia — Two hours after Malaysia Airlines Flight 370 disappeared on a flight from Kuala Lumpur to Beijing on March 8, the Boeing 777 experienced a total loss of power, according to a recently released report from the Australian Transport Safety Bureau. The significance of this is not explained in the report because it is part of the Malaysian investigation, and Malaysian officials have declined to comment on it. But it is another strange detail from the data collected by Inmarsat, the London-based satellite technology company.

In the absence of hard evidence, the satellite data have provided most of the clues so far for investigators trying to pin down the plane’s likely whereabouts, somewhere in the south Indian Ocean.

The fate of Flight 370 is uniquely puzzling, said Olivier Ferrante, formerly with the French air accident bureau, who oversaw the investigation into another airliner crash into an unknown ocean location, Air France Flight 447, which vanished into the Atlantic in 2009. 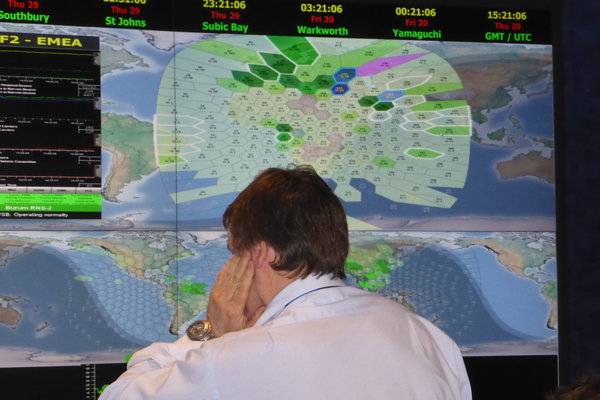 The control room at Inmarsat’s headquarters in London. The loss of Air France Flight 447 prompted Inmarsat to embed more time information in its satellite communications, which allowed it to calculate the route of the missing Malaysia Airlines jet. CreditChristine Negroni

“So far,” Mr. Ferrante said, the Malaysia Airlines disappearance “is a crash with no airplane, no bodies, no crash site, no physical evidence. It is a virtual crash until a piece of wreckage is found.”

The hunt for Flight 370 has shifted focus several times — a frustrating but unavoidable process, said Martin Dolan, chief commissioner of the Australian safety bureau, who said the searchers had had to investigate signals mistakenly thought to be coming from the plane’s “black box” locator beacon.

The most recent area of focus, announced June 26, has been derived from complex computer modeling and probability studies within the framework of the Inmarsat data.

The satellite information has been used almost from the start of the search, when it showed that the plane had not gone down in the South China Sea, a surprise even to the engineers at Inmarsat. “I saw the first analysis and I said, ‘Are you sure?”’ recalled Ruy Pinto, the company’s chief operating officer, in an interview.

Since then it has become clear that the data could be exploited in increasingly sophisticated ways, leading to a progressive redefinition and refinement of the search areas. “If there was an ah-ha moment,” Mr. Pinto said, it was when the engineers realized that timing information contained in electronic “handshake” exchanges between the plane and a satellite over the Equator “could be used in a simple way to define possible flight paths.”

After the Air France accident it took six days to find the first floating debris and two years to locate the airplane’s flight data and cockpit voice recorders. The search was assisted by information transmitted from the plane via Inmarsat satellites. But the delay in finding the wreckage prompted Inmarsat to modify its satellite network to include information about the time taken for a message to circulate from the ground to the satellite to the airplane and back again.

When the Malaysian jetliner went missing, this embedded time information and changes in the wavelength of the electronic signals, or pings, it emitted allowed the company to calculate the plane’s route south after crossing the Malay peninsula.

“The timing told you it was getting further away from the satellite — and the frequency changes told you a little bit more about where it was in relation to the north-south position of the satellite,” said Chris McLaughlin, a senior vice president at the company.

Still, as the plane’s disappearance shows, data that are now routinely and automatically transmitted by airliners are not sufficiently comprehensive to identify their precise location when they are out of radar and radio range.

On any given day, that includes planes transiting “the North Atlantic, the Pacific and over the remote areas in Africa and Russia,” said Kevin Hiatt, safety director at the International Air Transport Association, the airline trade group.

The industry is looking at piggybacking on satellite-based location reporting that already is used by some airlines for on-route weather forecasting and air traffic control. Proposals include increasing how often that location information is sent and assigning certain parameters to an airplane’s communication system so that unusual events would prompt automatic transmissions of location and other information.

Using satellites is expensive, however, and airlines restrict the amount of satellite time they buy, to control their costs.

“A one-size solution will not fit all,” Mr. Hiatt said. “Not all flights operate in a radar environment while others are operating every day in radar. Not all are equipped the same.” He added that I.A.T.A. was working with a United Nations agency, the International Civil Aviation Organization, on aircraft tracking and would present options to airlines to “fill the gap” in global coverage by the end of the year.

The I.C.A.O., with a broader agenda, is also reviewing ways that airliners could send flight data to the ground, an approach that could someday replace their onboard black box recorders.

Even at the time of the Air France accident, sending flight data based on some triggering event was possible, said Viraf Kapadia, chief executive of Star Navigation, a flight monitoring service based in Toronto, who said he had suggested it to the crash investigators.

“Everyone talked about it,” he said, but then “suddenly everyone went to sleep, I.A.T.A. and I.C.A.O.” He added, “People were worried about cost.”

Officials at both aviation organizations say that it takes time to make broad changes in a complex industry. But they concede that cost concerns have been a consideration.

“Much of the technology already exists” to enable global tracking of airplanes in flight, the I.A.T.A. director general, Tony Tyler, said in June. “One issue is, of course, the cost of doing this. It would be wrong to think this is not an important consideration.”

In the absence of physical evidence, electronic data has proven its value in Malaysia, Mr. Kapadia said. “There’s an absolute revolution going on,” he said, calling the Malaysia flight “a pivotal turning point.” Yet, for all the high-tech guidance, investigators still have not found the plane, a reminder of the limits of current applications of the technology.

“It is important to have a scientific approach and tools and to have a clear strategy based on data,” Mr. Ferrante said. But ultimately, he acknowledged, pinpointing a plane’s location is still often “a matter of luck.”